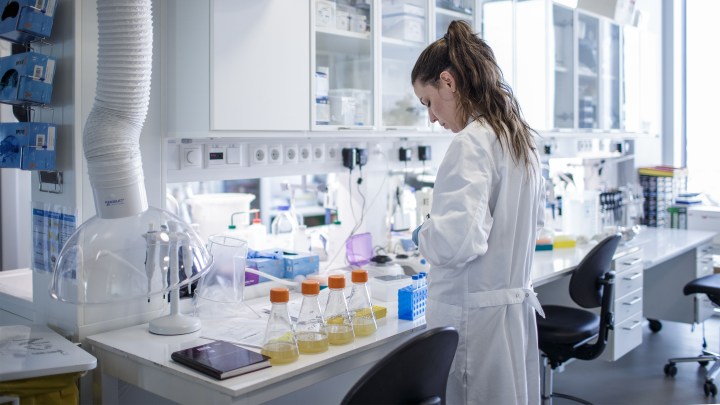 COPY
A researcher works on a vaccine for COVID-19 at the Copenhagen University research lab in Denmark in March. Thibault Savary/AFP via Getty Images
COVID-19

A researcher works on a vaccine for COVID-19 at the Copenhagen University research lab in Denmark in March. Thibault Savary/AFP via Getty Images
Listen Now

Nearly 200 groups are trying to come up with a coronavirus vaccine. At least two dozen have reached the clinical trial stage.

How much will those vaccines, if they materialize, cost?

John Lewis, CEO of Canadian biotech company Entos Pharmaceuticals, echoed the comments of many executives when he said he’s not thinking about price right now.

“I think what’s on most people’s mind is how can we achieve this,” he said.

Entos’s technology uses DNA to trigger an immune response. It was originally developed to fight cancer, but the company pivoted and jumped in the ring to fight COVID-19. Lewis said there is pressure to keep costs down, but the cost of a vaccine depends a lot on how it’s made: “Does it need to be made in fermenters? Can it be filled and finished in a vial or a pre-filled syringe, and are those manufacturing capacities available in the countries where you want to deploy the vaccine?”

The cost of developing a vaccine, including basic research and clinical trials involving tens or hundreds of thousands of people, can be as little as $150 million if researchers are lucky and stumble quickly on something that works, according to Lewis, up to well past a billion dollars.

Out on the open market, vaccine pricing is opaque, a black box even, said Jason Schwartz, assistant professor of health policy at the Yale School of Public Health.

“For decades the vaccine divisions of drug companies were seen almost as charitable arms — prices were low, there were not a lot of profits to be had,” he said. That changed in 2000 after a blockbuster pneumonia vaccine emerged on the scene and showed vaccines could make money. Prices have risen ever since, in part, Schwartz said, because vaccine makers have a lot of pricing power.

“The Affordable Care Act requires insurance to cover recommended vaccines with no cost sharing passed along to patients, so that opens the floodgates of vaccine pricing. And for children, a federal program called the Vaccines for Children program, through which the federal government purchases vaccines for about 50% of American kids, is required to purchase vaccine doses for all those eligible for any recommended vaccine.”

Ultimately, the price of a vaccine for SARS-CoV-2, the virus that causes COVID-19, is really anyone’s guess.

“We can’t rule out a possibility that these vaccines will be very high price,” said Bruce Y. Lee, a professor of health policy and management at the City University of New York’s Graduate School of Public Health & Health Policy. “Developers are being asked to develop this very quickly, so they may demand a very high return on it.”

Pharmaceutical companies Janssen and AstraZeneca, who’ve together received $1.7 billion in federal government support, both said their potential coronavirus vaccines would be offered on a not-for-profit basis during the pandemic period.

In general, vaccine pricing is a question of negotiation between insurers, vaccine makers and sometimes governments, said Lee.

There’s also a difference between the price a manufacturer charges and the price a consumer sees. The federal government awarded Maryland-based vaccine maker Novavax $1.6 billion in exchange for ownership of the first 100 million doses of any coronavirus vaccine it makes. That comes out to an investment of $16 per dose. But the government-owned vaccines would then be offered to the public for free (providers are allowed to charge for the cost of administering the vaccine).

It may well be that several vaccines are developed at different prices. “What if you have a vaccine that comes out but it’s not perfect, but it does reduce your risk of getting the disease by a certain amount?” Lee said. “Well that’s gonna have a different value from a vaccine that’s higher efficacy.”

Internationally, vaccine pricing is all over the place, observed Yale’s Schwartz.

“You see a spectrum of prices,” he said. “A vaccine that costs 200 a dose in the U.S. might cost three or four dollars a dose in the 50 or 60 lowest-income countries in the world.”

The world’s poorest countries get discounts through a combination of donations from wealthier countries and agreements with vaccine makers to lock in purchases for several years through Gavi, a vaccine alliance co-founded by the Bill and Melinda Gates Foundation in 2000. There’s a similar effort underway to cover coronavirus vaccines.

Epidemiologists say if the virus is allowed to survive anywhere, it’s a threat everywhere. Price, they say, shouldn’t be a barrier to fighting it.