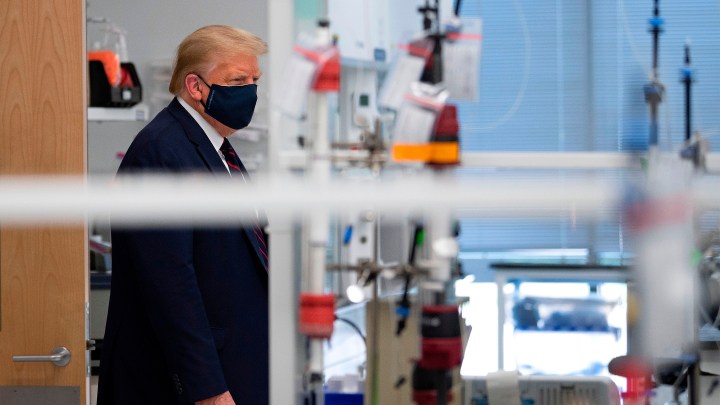 The Trump administration today announced a blockbuster, $2.1 billion vaccine-development deal with two drug companies, Sanofi and GlaxoSmithKline. If the vaccine venture succeeds, Americans would get dibs on 100 million vaccine doses. Hours later, the European Union struck a similar arrangement with Sanofi, in exchange for up to 300 million doses.

Is vaccine development becoming a situation in which each country is on its own? If so, what does that mean for the rest of the world?

“In a sense it’s an oxygen-mask-on-an-airplane analogy,” Marks told the BIO Digital 2020 conference June 8. “The oxygen masks are just deployed. You’re gonna put on your own first and then help others. We want to help others as quickly as possible.”

Critics, however, argued the analogy doesn’t hold up.

“The masks will only drop in first class,” said Tom Bollyky, director of global health at the Council on Foreign Relations. “And it will leave everyone else waiting some time to get access to them.”

Bollyky said he worries that rich countries monopolizing vaccine doses may inoculate their entire populations, including low-risk citizens, before sharing supplies with other countries.

In the spring, many countries, including Taiwan, China and Germany, did hoard supplies of ventilators, masks and medical machine parts.

“This has actually been the history of all pandemics,” said Dr. Rebecca Weintraub, assistant professor of global health at Harvard Medical School. She endorsed an alternative model to each country going its own way.

The group Covax, organized by the World Health Organization and other international groups, aggregates investments from governments, funds vaccine companies and plans to share vaccine supplies with all participating countries.

“We can pool the investment,” Weintraub said. “We can protect the front-line workforce and those at risk. Those discussions of allocations can be done at a global table versus at the national level.”

China, India and the U.S. have not joined Covax.

Experts warn that if vaccine nationalism takes hold, it could backfire: Countries that are left out could block exports of vaccine syringes, vials and other components critical to saving lives.