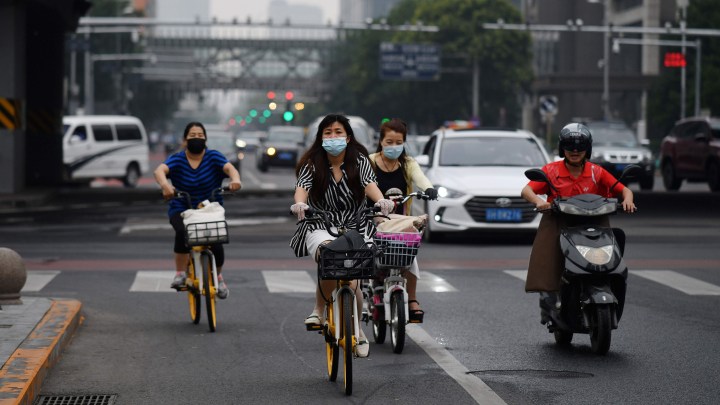 China reports that its economy grew 3.2% in the second quarter from the same time last year. That makes it the first major economy to rebound since COVID-19 hit.

For comparison, China’s economy shrank 6.8% in the first quarter. Marketplace China correspondent Jennifer Pak has more on this from Shanghai. The follow is an edited transcript of her conversation with Marketplace’s Sabri Ben-Achour.

Sabri Ben-Achour: So what does an economic rebound look like on the streets of Shanghai?

Jennifer Pak: On the surface, it looks like everything is back to normal, except most people are still wearing face masks. Popular shops and restaurants — those that are still open that is — are full on weekends, but I’m starting to see a number of small shops posting signs, looking for someone to take over their lease. So times are a bit tough.

Ben-Achour: And 3.2% year over year, that’s a big turnaround from the almost 7% contraction in the first quarter alone. How did China manage that?

Pak: Well, it’s partly due to the authorities being quite aggressive about containing the coronavirus — of course, after initially dragging their feet. They went from sealing off whole cities and provinces with high infection rates to now doing widespread testing and tracing. For example, there was an outbreak recently in Beijing, and that’s what they did. So now what we’re seeing are road construction projects, factories churning out more products. But there isn’t that much demand for that stuff, especially in the U.S. or Europe. So millions of people are out of work. Officials say unemployment for June still hovers close to 6%.

Ben-Achour: Well, 6% is far better than double-digit unemployment rates in the U.S. Does this mean that the U.S. and the rest of the world could rely on Chinese consumers?

Pak: Maybe not. That unemployment figure it doesn’t really account for millions of workers from the countryside who are in the cities and jobless. And, unlike the U.S., China’s government has not been giving cash handouts to its citizens. People are watching what they spend, so retail sales remain fairly weak, falling 1.8% last month compared to a year earlier.