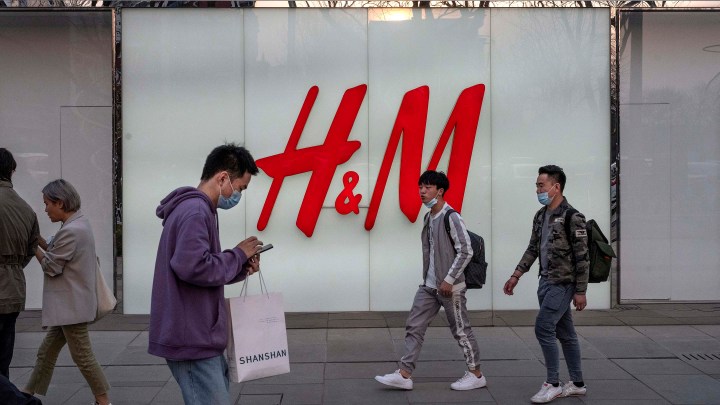 COPY
The clothing retailer last year announced on its website that it would no longer source cotton from Xinjiang, a province where the U.S. and other governments accuse China of holding at least 1 million Uyghurs in forced labor camps, which China denies. Kevin Frayer/Getty Images

The clothing retailer last year announced on its website that it would no longer source cotton from Xinjiang, a province where the U.S. and other governments accuse China of holding at least 1 million Uyghurs in forced labor camps, which China denies. Kevin Frayer/Getty Images
Listen Now

H&M is trying to recover from an uproar in China. The clothing retailer last year said it would no longer source cotton from Xinjiang, a province where the U.S. and other governments allege China is holding at least 1 million Uyghurs in forced labor camps, which China denies. Other brands like Nike and Adidas have distanced themselves from suppliers in the region.

Marketplace’s China correspondent Jennifer Pak in Shanghai has more on this. The following is an edited transcript of her conversation with “Marketplace Morning Report” host Sabri Ben-Achour.

Sabri Ben-Achour: This sounds like a very difficult situation for foreign brands in China.

Jennifer Pak: It is, but if you look at the level of boycott, it’s not uniform for all brands. Most of the consumer vitriol is aimed at H&M, rather than Nike and Adidas, which have far bigger presences in China. Some Chinese landlords shut H&M locations in smaller cities. Apple China and Baidu maps, rideshare app Didi and Chinese e-commerce sites have deleted H&M from their databases. But that’s not happening to Adidas and Nike. Yes, they’ve had celebrities in China cancel endorsement deals, but that’s about it so far.

Ben-Achour: What is the long-term impact of these boycotts on brands?

Pak: Usually they bounce back, especially if there’s no domestic substitute, like with the NBA. Games started to be shown again on Tencent’s video platform one month after the supposed boycott in November 2019, and now NBA merchandise is back on e-commerce sites. However, state broadcaster CCTV still has not fully resumed broadcasting of NBA games. Of course, the NBA situation is a little different — it’s not the Chinese consumers who have instituted a boycott.

If the Chinese central government steps in on the H&M situation like it did for South Korean supermarket giant Lotte, where many of its stores were shut for fire safety code violations, then the company has to exit China.

Now, China says most of its cotton is harvested with machines and not forced labor. If the U.S. and the EU continue to press and penalize China over this, companies might have to choose a side: use Xinjiang cotton or be locked out of the world’s second-largest economy.