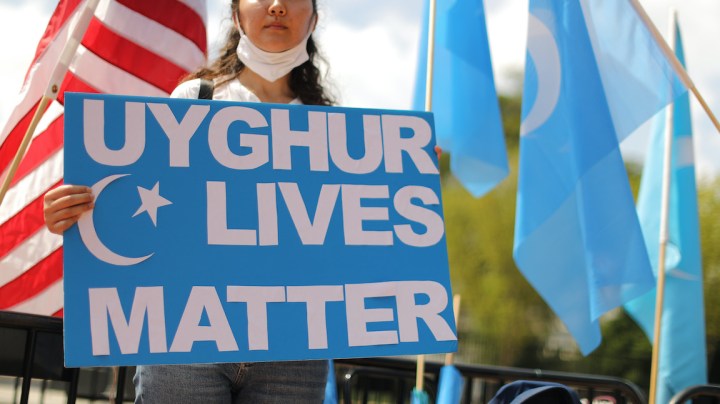 COPY
Some companies have protested the reported abuse of Chinese Uyghurs but face a backlash in the Asian nation. Chip Somodevilla/Getty Images

Some companies have protested the reported abuse of Chinese Uyghurs but face a backlash in the Asian nation. Chip Somodevilla/Getty Images
Listen Now

Some of the world’s biggest brands — Nike, Adidas, H&M — find themselves in the hot seat in China today. Their sin: promoting human rights.

Several multinationals have distanced themselves from Chinese suppliers, following reports of forced labor in cotton fields and factories that are part of global supply chains. At issue: ethnic minority Muslims in western China, known as the Uyghurs, who, according to U.S. government reports and research on China, have been forced into indoctrination centers and work sites.

But as tensions increased and several governments, including the United States, sanctioned Chinese officials over allegations of human rights abuses of Uyghurs, an online backlash developed in China on Thursday.

Several Chinese shopping websites removed items from Swedish clothing retailer H&M, which had said it was “deeply concerned” about reports of forced labor. Chinese actor, singer and TV host Wang Yibo publicly terminated his endorsement deal with Nike, which had also stated it was “concerned” about forced labor reports. Several actors made similar announcements ending ties with Adidas, which had suspended its links to a factory reportedly using transferred Uyghur workers, stating that “we strictly prohibit forced labour.”

“It’s been a massive wake-up call for multinational corporations.”

“It’s been a massive wake-up call for multinational corporations,” said James Leibold, senior fellow at the Australian Strategic Policy Institute and China scholar at La Trobe University. “And there’s been a lot going on behind the scenes. We know this because we’re in contact with many companies.”

The change follows years of activism from Uyghur advocates including Rushan Abbas, a student activist who left western China’s Xinjiang province for the United States in 1989, the year of the Tiananmen Square crackdown.

“The Uyghur slaves are picking cotton in the 21st century,” Abbas, co-founder and executive director of Campaign for Uyghurs, said in an interview in the Washington, D.C., suburbs, where she lives.

Abbas mentioned her sister, Dr. Gulshan Abbas, who has been detained in China. In September 2018, Rushan Abbas spoke on a Washington think tank panel on Uyghur abuses. Six days later, she said, her sister was detained.

“So I imagine — it’s a beautiful day here today — is she forcibly taken to some field to pick cotton?” Abbas said. “She wears glasses because her eyesight is really bad. I spoke to one of the [former] inmates in Turkey. I asked her if [Uyghur] inmates are allowed to wear glasses, and she said no. So I don’t know how she is able to survive. How she is, if forced to make something, how she is doing that.”

“There are a range of middlemen, companies that essentially trade in Uyghur workers,” Leibold said. “Literally a price per head.”

One reason for the labor-transfer scheme is to alleviate worker shortages in parts of China and lower labor costs, according to a report from Chinese researchers at Nankai University’s China Institute of Wealth and Economics obtained by Xinjiang researcher Adrian Zenz.

“If you refuse directly then you will be seen as unsubmissive.”

Darren Byler, an anthropologist at Simon Fraser University in Canada who recently conducted fieldwork on Uyghur laborers, said for the workers in question, the labor-transfer system is coercive.

“It’s probably not always stated, it’s just something that everyone knows, is that if you refuse directly then you will be seen as unsubmissive,” Byler said. “At first you would get points deducted or you would get a warning. But over time if it becomes a pattern, then I think it’s very likely that that person will be detained.”

Both the Trump and Biden administrations have accused Beijing of committing genocide against Uyghurs. In January, U.S. Customs and Border Protection announced it would ban imports of all cotton and tomato products from Xinjiang.

“The official designation of genocide by first Secretary of State Pompeo and then Secretary of State Blinken has really crystallized this issue in the minds of many Americans,” said Isaac Stone Fish, founder and CEO of Strategy Risks, which quantifies corporate exposure to China.

The Chinese government has repeatedly denied the charges and applied countersanctions against European officials and researchers.

The measures raise reputational risks to brands, including Costco. On Oct. 8, 2019, the Associated Press reported that a Chinese factory using forced Uyghur labor — and blacklisted by the U.S. government — had sold pajamas to the retailer.

A day later, Costco said in a statement: “Although Costco has no reason to believe that any sleeper in its inventory was inappropriately sourced, out of an abundance of caution it has suspended sales pending further investigation and developments.”

“This illustrates a complete failure on the part of Costco,” said Scott Nova, executive director of Worker Rights Consortium. “And is indicative of the see-no-evil, hear-no-evil, speak-no-evil attitude that major brands and retailers brought to this issue through 2019.”

Last week, Bloomberg reported that Apple stopped buying from one of its component suppliers in China, Ofilm Group, which was named in the ASPI report as using Uyghurs in a government labor-transfer program. Apple did not respond to two requests for comment.

“Our members are getting there,” Herman said. “Many feel that they’ve gone all the way back and can be sure that they have nothing in their supply chain. Others are still going through the process.”

It’s a challenging process. Xinjiang province, where most Uyghurs are from, produces around 20% of the world’s cotton.

And China is a notoriously difficult place to conduct independent audits of factories, where workers can be coached or pressured to give sanitized responses.

“Factory owners have been tipped off that there’s going to be an audit.”

“We’ve heard cases where maybe factory owners have been tipped off that there’s going to be an audit,” said Ryan Aherin, an analyst at the risk advisory firm Verisk Maplecroft. “So they make sure that certain workers come in that day. Those are fairly common practices.”

Nevertheless, it may behoove companies to conduct due diligence as best they can.

“However expensive it is to unravel a supply chain that originates in Xinjiang, it’s probably cheaper than the hit to your business that you’re going to get otherwise,” said Stone Fish of Strategy Risks.

At the same time, global brands that publicly pulled out of Xinjiang have taken a public relations hit in China. H&M, in addition to having its products removed from e-commerce sites, had its stores erased from Chinese map apps. In fact, the company’s mobile application was banned from several Chinese app stores.

Since Wednesday, a number of brands have appeared to try to appease Chinese consumer anger. H&M stated that it “respects Chinese consumers as always.” Asics, the Japanese sportswear giant, reportedly said on Chinese social media that it will continue to source Xinjiang cotton. Chinese sports brand Anta Sports announced it would quit the Better Cotton Initiative so it can continue buying cotton from Xinjiang. The company’s stock price rose.

The parent company of Zara, Inditex, appeared to remove a “zero-tolerance” statement from its website. A previous version of the company web page, from a December 23 online archive, stated: “At Inditex we take a zero-tolerance approach towards forced labor of any kind…. We are aware of a number of such reports alleging social and labour malpractice in various supply chains among Uyghurs in Xinjiang (China) as well as in other regions, which are highly concerning.” That web address, at publication time, showed a broken link.