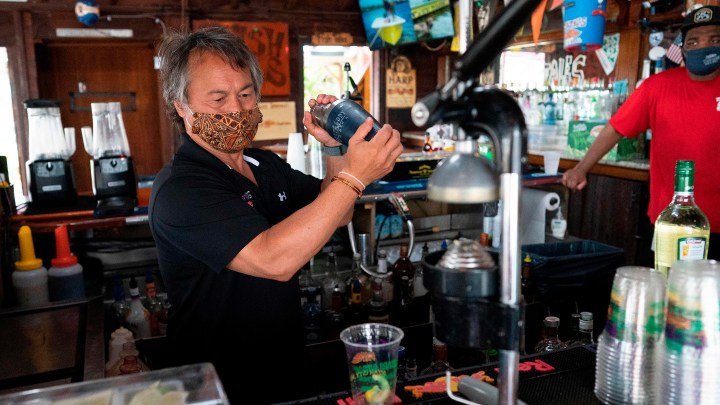 COPY
A bartender mixes a drink at a Maryland restaurant. PPP loans allowed some bars and restaurants to stay afloat during the coronavirus pandemic. Alex Edelman/AFP via Getty Images
COVID-19

A bartender mixes a drink at a Maryland restaurant. PPP loans allowed some bars and restaurants to stay afloat during the coronavirus pandemic. Alex Edelman/AFP via Getty Images
Listen Now

The federal government has released the names of companies that received loans of $150,000 or more through the Paycheck Protection Program.

There are some familiar names among the tens of thousands on the list: Kanye West’s fashion line, Yeezy, got between $2 million and $5 million. TGI Fridays and P.F. Chang’s received between $5 million and $10 million. What did the businesses we probably haven’t heard of do with their PPP money?

When New York City locked down in March, Short Stories, a cocktail bar and restaurant, furloughed its entire staff of 15. Then it got a $90,000 PPP loan.

“We brought back a bartender, and we’re hiring new bartenders. And we brought back our old porters and security people,” said Ashwin Deshmukh, a partner at the restaurant. He said the loan money has allowed Short Stories to take some risks to make up for lost revenue.

“We were open till 4 a.m. on the weekend before, and that was a decent amount of our weekly profit,” Deshmukh said.

So the restaurant is trying things like cocktails and picnic baskets to go. If it weren’t for PPP loans, some businesses might not have reopened at all.

“If we did reopen, I don’t know that it would have been at the capacity that we have,” said Mariel Arbuckle Terone, part-owner of Left Coast Seafood, a casual dining restaurant in Venice, Florida.

“It may have looked like us being open only five days a week, only being open for dinner versus lunch and dinner,” she said. With the loan, the restaurant is open seven days a week and it’s brought back 80% of its employees. She said the money is running out, and the restaurant might have to start laying people off again.

These loans were not always easy to get. The first round of funding ran out in just under two weeks. Meanwhile, a lot of banks didn’t really know what was going on. Sally J. Cram is a periodontist in Washington, D.C.

“They didn’t have all the information and were getting things that would change and require you to provide different documentation every day,” Cram said.

Her practice’s PPP loan of $116,000 has allowed her to bring back a dental assistant, two hygienists, two receptionists and an accounting professional.