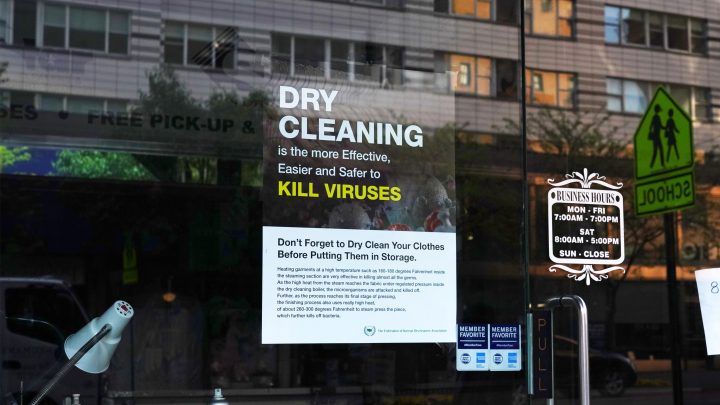 COPY
Personal and laundry services, which includes dry cleaners, laundromats and other businesses, was among the many sectors that expanded payrolls in June. Cindy Ord/Getty Images
COVID-19

Personal and laundry services, which includes dry cleaners, laundromats and other businesses, was among the many sectors that expanded payrolls in June. Cindy Ord/Getty Images
Listen Now

Though the U.S. economy still has far fewer jobs than it did before widespread pandemic shutdowns began, the Labor Department reported on Thursday that a record-breaking 4.8 million jobs were added to payrolls in June. But the gains weren’t just notable in magnitude, they were also widespread across industries.

About 40% of the jobs gained were in the leisure and hospitality industry. But there were also jobs added in retail, education and health services, manufacturing and professional and business services.

The diffusion index, a measure of the breadth of job gains or losses across industries, jumped for the second month in a row.

“So what the diffusion index is telling us is that this was in fact a pretty broad-based adding of jobs across industries,” Gimbel said.

An important caveat to keep in mind, however, is that the data we’re seeing now was collected back in the second week of June. That’s before daily new cases of COVID-19 started spiking again.

“We don’t know how the surge in COVID-19 cases has impacted the labor market,” Gimbel said. When it comes to what we know about which industries will make it through this crisis, she said, “it’s just too soon to tell.”