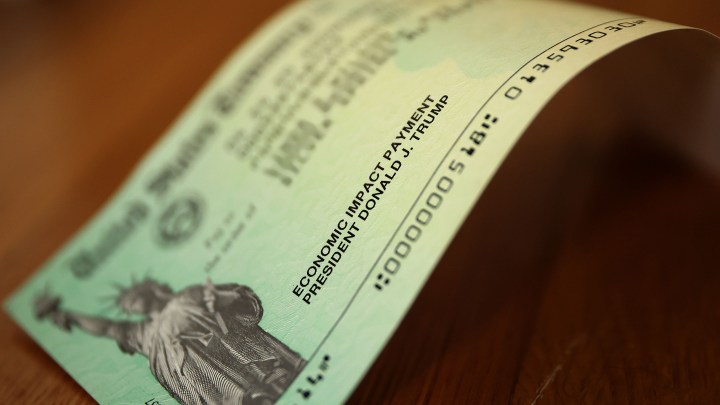 COPY
"We're managing to do it right now in the COVID pandemic. We send people checks," Blyth says. "Imagine if those checks were endowment checks." Chip Somodevilla/Getty Images
Reimagining the Economy

"We're managing to do it right now in the COVID pandemic. We send people checks," Blyth says. "Imagine if those checks were endowment checks." Chip Somodevilla/Getty Images
Listen Now

The COVID-19 pandemic has made blatantly clear the cracks in our economy: essential workers lacking in adequate pay and benefits, Black and Latina women disproportionately impacted by layoffs and furloughs, dysfunctional unemployment systems.

So how will we create a stronger economy coming out of this recession? Mark Blyth, professor of international economics at the Watson Institute for International and Public Affairs at Brown University and co-author of the book “Angrynomics,” believes at least part of the way forward lies in a “national fund for our wealth” that would distribute earnings to Americans.

Blyth spoke with “Marketplace Morning Report” host David Brancaccio about his book. The following is an edited transcript of their conversation.

David Brancaccio: The system before pandemic was not working to the point that many people were angry. Now, your book argues that some of that anger is bad and destructive, and some of that anger is the right sort of anger, something more productive, based, I think, on moral outrage, really.

Mark Blyth: Absolutely. A very clear place to see this is in Iceland. So you remember 10 years ago Iceland was a giant financial party that went horribly wrong? At that point in time, there was no huge outpouring of anger, there was a bit of resentment against banks, but basically society closed together and basically supported each other, and they got through the worst of it. The anger poured out when they found out that their politicians were hiding their money through the Panama Papers. And that led to this outpouring of what we call a kind of righteous anger, a kind of moral anger that is a desire to be heard. And it’s something you see in a lot of the populist uprisings of both left and right — this notion that we’re not being listened to by our elites and that they play by a different set of rules.

Brancaccio: Well, we’re seeing this from the American streets and actually beyond right now, about institutional racism, which also expresses itself in the way we put together this economy.

Blyth: Of course, anger and racism are not reducible to each other, but you can’t really have the type of inequalities amongst groups and amongst races in the United States that we see unless you really try hard. Let me give you one statistic on this one. Boston Federal Reserve put out a [2015] report that did median net family wealth for Boston. White family, $247,000; Black family, eight bucks. Not a typo, eight bucks. When you add up the assets and the liabilities, right, when it all nets out — because they don’t own houses, because they’ve been redlined in the property, because they can’t borrow against their property, because they’re excluded from banking — all of those things ends up creating this astonishing difference between these two groups. And that is, of course, a source of legitimate anger amongst that population.

Brancaccio: You would like to actually change the economy in profound — I mean, you admit it — radical ways to address this issue of the sense that some elites, sometimes the corporate media working with the elites, has created a system that doesn’t serve a lot of people.

Blyth: The type of ideas that we want to push are ones that hopefully go beyond the usual left and right politicized boundaries. A very simple example of this is even though the United States has been doing generation after generation of tax cuts and underfunding its public services, the marginal rate of tax on low-income groups, when you include sales taxes and everything, is very high. So coming out and saying, “Let’s pay more taxes,” is a non-starter, that’s not going to work. But you know what we should have? Net wealth taxes. Because the amount of income which is generated through assets, which gets taxed completely different from labor income, which is what most people have, that’s exploded over the past 30 years. That needs to be addressed.

Another thing that we’re very fond of is the notion of a citizens’ wealth fund. When you have a crisis like this, everyone dumps equities, which makes them artificially cheap; they buy bonds, which makes them artificially expensive, but the yields go negative. Why doesn’t the government step in, rather than private equity, buy up those shares, put them into a passive vehicle? You’re not talking about control, but you get the upside of asset ownership. That’s 6% compounded as those equities recover.

Brancaccio: Well, let me understand this citizens’ wealth fund a little bit better. I mean, I think of the sovereign wealth funds that places like Saudi Arabia and Norway have put together, these massive investment, almost endowments, from their oil wealth. It’s a bit like that?

Blyth: Yeah, it’s very similar to that. The only question is how do you fund it? And we live in a world where we’ve got no inflation, negative real interest rates, which means that investors are paying the government when they borrow. So long as your economy’s in positive growth territory, if you have negative real rates, your debt will shrink. So we could even debt finance the purchase of these distressed equities, support serious parts of the American economy that are under stress because of COVID. And after the recovery, rather than handing it back to Wall Street, the public owns the wealth not in the way of some socialist notion, in a very capitalist notion that we are passive investors in the national fund for our wealth. And then basically we’re able to distribute the earning from that not to the top, but more to the middle and the bottom.

Blyth: Well, we’re managing to do it right now in the COVID pandemic. We send people checks. Imagine if those checks were endowment checks. So let’s say you issue 20% of [gross domestic product] in bonds because the market’s in a panic, and they buy a negative real rate. You take 20% of GDP, you hoover up all those assets, you allow them to grow for 10 years. You could pay back the debt and generate a couple of trillion dollars. You could then say to people when they’re 21, “OK, you want to start a business? Good.” We have to do something about college costs; this is another way of doing it. There’s many things that we could do, but we’ve already gotten in the habit of mailing people checks. Why not mail them checks that they’ve actually earned because they are actually the de facto owners? They took on the risk when they bought these assets. Now they should get the reward.

Brancaccio: I mean, should I worry that if the government gets into this giant stock portfolio or portfolio of securities that, if something really bad happens, it tanks? And we’re living at a time when something truly bad did happen.

Blyth: Yeah, but look on the bright side: When it tanks, what happens is that the value of government bonds goes up. So the government could essentially refinance itself in that crisis and buy even more equities to take the upside the next time the market turns. It works. It really works. There’s a reason that Norway and everyone else does this stuff. Why does it have to be limited to people who have got oil rents? Why can’t we do that with the productive stock of American capital and make it work for everyone?

Brancaccio: All right, and on this helicopter money — giving money out more routinely, as we are doing now, in the middle of COVID — one of the criticisms of what is really a universal basic income is that it’s money that people didn’t work for, and they have a problem with that. You have a slightly different wrinkle on the helicopter money.

Blyth: We think it’s simply an efficiency question. If you think about what we’ve been doing, over round after round of quantitative easing, is we’ve been basically flooding the markets with cheap money, which allows asset holders to pick those up and get even more returns to their assets. It incentivizes bad behavior, such as share buybacks, it discourages real investment and it costs an awful lot of money.

If you just mail people checks, those people will spend 100% of those checks, which is true of the majority of American workers. You just get a much bigger fiscal bang for the buck. It’s simply efficient. If you want to spend less money when you have to cushion the blow of a recession, definitely go for helicopters. Forget QE ⁠— all it does is lead to greater asset inflation and even greater inequality.

Brancaccio: Right, so giving money to people but maybe not just for nothing? You have this idea of maybe we would sell, when we give up our privacy rights to digital companies, maybe they should be worth something to us as individuals?

Blyth: Absolutely. If we think about the S&P, 20% of the S&P is powered by the “FANGs” ⁠— Facebook, Apple, the rest of the digital companies. And many of those companies, the majority in fact, only exist because our data is their profit. Every time we use their services from Google Maps to Facebook, we’re giving them data that then they repackage and commodify and sell to different end users. Now imagine that we were a mobile phone company ⁠— we would never allow this. The government would say to the mobile phone company, “Do you want a bit of the spectrum? Yeah. OK, here’s how many billions it’s going to cost you to lease it for a certain amount of time.” We should do exactly the same thing with our own data so that we get the returns and it doesn’t all just go back to those companies. In that case, it’s not something for nothing. Your asset is in a sense your data, which in a digital economy is becoming increasingly important.