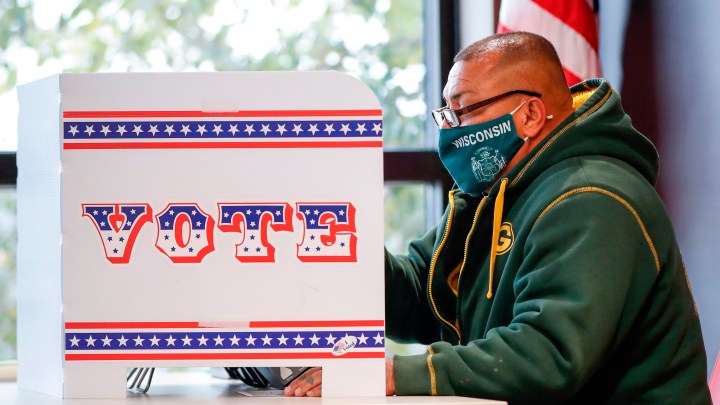 COPY
A man casts his ballot at Tippecanoe Library on the first day of in-person early voting in Milwaukee, Wisconsin, on Oct. 20, 2020. Kamil Krzaczynski/AFP via Getty Images
Elections 2020

A man casts his ballot at Tippecanoe Library on the first day of in-person early voting in Milwaukee, Wisconsin, on Oct. 20, 2020. Kamil Krzaczynski/AFP via Getty Images
Listen Now

The vote counting, and the disputes over the vote, continue on the second day after the election. With the caveat that some are now raising questions about the pre-election polling, we’re starting to get a sense from exit polling of just how Americans were feeling about key issues as they voted. Issues like the COVID-19 pandemic and the economy.

Americans were deeply divided on COVID and the economy, said Larry Rosin, president of Edison Research. It conducted exit polling for the major TV networks. He said voters were asked whether the U.S. should prioritize COVID-19 containment or economic recovery.

It appears Democrats are having a harder time in the COVID economy. About two-thirds of voters for former Vice President Biden said they’re suffering financial hardship, compared to just one-third of voters for President Donald Trump.

COVID is impacting the consumer economy as a whole, said Marshal Cohen, retail analyst at NPD. He just conducted his annual holiday survey.

“Thirty-nine percent tell us that they actually will be spending less because of the economic climate and the COVID conditions,” he said.