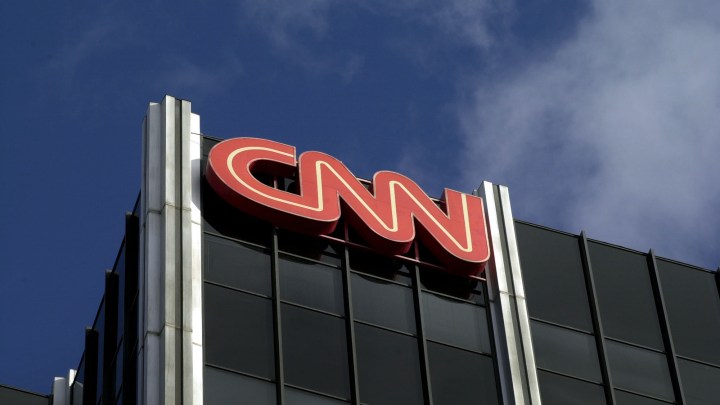 COPY
"Look at what these 300 people who started CNN created back in 1980," says author Lisa Napoli. "News became the story itself, for better or for worse." David McNew/Newsmakers

"Look at what these 300 people who started CNN created back in 1980," says author Lisa Napoli. "News became the story itself, for better or for worse." David McNew/Newsmakers
Listen Now

The 40th birthday of the Cable News Network, CNN, came and went on June 1. What was once a small outfit based in Atlanta has grown into a giant of cable television.

CNN was in third place for viewership, according to Nielsen, this week, behind the top contender, Fox News, and second-place MSNBC.

Lisa Napoli, writer and author of “Up All Night: Ted Turner, CNN, and the Birth of 24-Hour News,” joined “Marketplace Morning Report” host David Brancaccio to trace the network’s history. The following is an edited transcript of their conversation.

David Brancaccio: So what was the CNN thing originally? News for insomniacs?

Lisa Napoli: Well, Ted Turner was an insomniac himself. But it was basically a way for Ted to make use of this very sexy new technology, which is marrying the cable with the satellite. He wasn’t so into news, but he was into the idea of experimenting with this concept. And news just seemed the cheapest way to get into the business.

Brancaccio: And he got the overnight crowd there for a bit.

Napoli: He learned that overnight would work. Earlier, when he had this little UHF station called Channel 17, later known as WTBS in Atlanta, and when he bought that station in the late 1960s, he said, “Why are we not on all night? It’s a whole day part that we’re not monetizing.” And so he made them go all night. They weren’t sure what they were going to put on. They weren’t sure anybody would watch. But, sure enough, they proved that people did watch, and what they watched most of all was this jokey newscast that they put on to satisfy the Federal Communications Commission requirements to have public service news in the middle of the night, making Bill Tush, the host of that show, the first cable news celebrity.

Brancaccio: And remember what cable TV used to be: extremely localized in a certain region. It wasn’t like the whole thing was linked up. And this is one of this entrepreneur, Ted Turner, it was one of his insights.

Napoli: It’s so important to remember — and we forget this now that our iPhone is a TV studio in our hands — that cable was just a utility. It was just a way, if you lived in the hinterlands and couldn’t get broadcast TV nearby, that you could get those signals. And somebody, a bunch of guys who were really smart, including Ted Turner along the way, recognized that you could make this a bigger and splashier affair. So it’s only in our lifetime, those of us who are a little bit older, that we’ve seen cable become a force. And, of course now it’s a whole different animal.

Brancaccio: Now CNN was early into business news. I will say the “Nightly Business Report” on PBS television predates CNN “Moneyline” by about a year or so. But I remember the young Lou Dobbs looking, I don’t know, almost dashing on the business news back then.

Napoli: Yes, and Myron Kandel, who was a well-known financial columnist, Stuart Varney, they started “Moneyline.” You know, when they started CNN, they didn’t know what the heck they were going to do to fill the time. They weren’t so sure themselves. Was there news that was worth 24 hours, and would people watch it? And so one of the ingredients was financial news, which was basically, as Myron Kandel said, the vast wasteland on network news. Those guys, the business reporters who existed — and there were very, very few in television — would only maybe get one or two hits a week. So they elevated it to a new level, long before CNBC came on and made it a 24-hours affair. And of course, you.

Brancaccio: Yeah, I know. We’ve created a bit of a monster here. Now here we are, 40 years later, the internet pumps the news 24/7. But what you have to realize is before cable news and the likes of CNN, you often had to wait until evening if you wanted to see moving pictures of what’s going on. And this is one of the fundamental shifts, not just of media, but of society, I guess.

Napoli: Absolutely. The founding president of CNN, Reese Schonfeld, said he wanted people to watch news unfold. And that’s why this story, even if you’re not into history, is so relevant today. Because look at what he created. Look at what these 300 people who started CNN created back in 1980. News became the story itself, for better or for worse, and of course, that was accelerated even more by the internet.

Napoli: Right. Nor are you fact-checking, you’re just letting it happen. And the viewers are watching it along with you, like a sporting event. News really became sports.

Brancaccio: And it’s become clear that the bigger money in cable news is the cable news where there’s a political leaning of some sort. The middle of the road hadn’t worked out for many years for CNN.

Napoli: Well, actually, it was fine until there was competition. You know, eventually, Rupert Murdoch, Roger Ailes came along and started Fox News, which changed the entire equation. But up until then, the news had been the star. And they did — you know, there was good, old-fashioned, solid journalistic ethic, with the whole evolving technology [and] evolving story in front of you. But it still was a different animal, until there was competition, and CNN had to change its tenor to go along with the tenor that had been presented by Fox News.

Brancaccio: Yeah, I remember there was this notion of CNN as “Chicken Noodle Network” or something like that.

Napoli: Yeah, it took a long time to get accepted by not just the TV viewing public, but by the press corps itself. And probably one of the earliest triumphs of CNN was worming its way into the White House press corps. Because the networks, historically, they had this stranglehold over news, and they didn’t want anybody else to be part of it. So it really was a floodgate that opened when CNN started. Whether you like it or not, whether you think it ruins society, it’s really important to look back and think about how we didn’t just get where we are today with all this information and noise overnight. It’s been happening gradually, over the course of the last four decades.

Brancaccio: And you know, viscerally, we’re all for more news and more choices. But back when there’s only a few newscasts put out by a few networks, there was something we could all share, maybe not agree with, but share the experience. I mean, do you think that what started with CNN but has now proliferated into many other cable news networks with different points of view, that that is contributing to the polarization that we see not just in this country, but around the world?

Napoli: Without a doubt, it’s the ultimate paradox because it’s freer than ever for the average person to get out and start something, get their voice heard. And yet that comes with a tremendous responsibility that a lot of people don’t know how to handle. So, yes, better than ever, more people, more diversity, more inclusion than ever because it certainly was a very homogeneous lot of people who were running television news before CNN came along. But it’s come with a huge price.