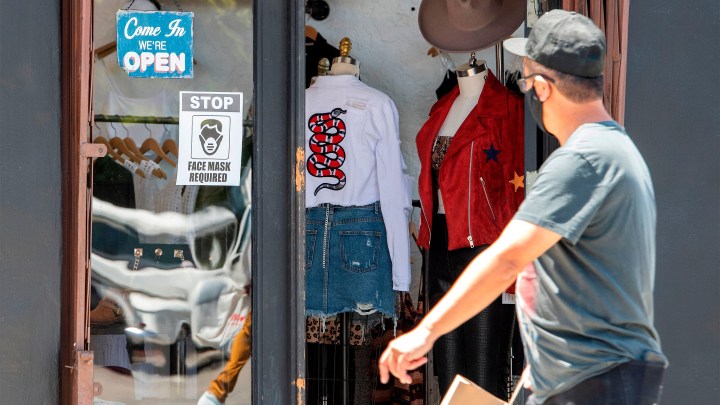 The Commerce Department released retail sales numbers Tuesday, and they were eye-popping — up 17.7% in the month of May. That percentage gain is a record, and it sounds like great news. But these are month-to-month comparisons, and frankly anything looks good compared to March and April.

When New York started reopening, it was time for William Bell to go outside.

“I just want to go and run an errand,” Bell said. “I want to get out of the house.” Since he tested positive for COVID-19 antibodies, he went to the majestic, soothing aisles of Home Depot.

“I needed help picking out a flower pot, and I got the advice of someone who worked there. She literally came up right next to me and was helping me pick out the right one, and it was a little weird at first, being that close together,” Bell said. “But we both had masks on, and we just accepted it.”

Lots and lots of William Bells went shopping last month. Clothing and accessories store sales were up 188% month over month. Furniture and home furnishings up 90%. Electronics and appliances up 51%. If you take out car dealers, gas and restaurants, retail sales were actually up 1.7% in May year over year, according to the National Retail Federation, where Jack Kleinhenz is chief economist.

And now, let’s all go shopping for a brand-new reality check. Lindsey Piegza has one for free — she’s chief economist at Stifel.

“Yes, we did have some pent-up demand,” Piegza said. “But going forward with unemployment benefits ending, with the [Paycheck Protection Program] coming to an end, will the consumer be able to financially continue to spend at these more positive levels?”

They will not, according to Joe Brusuelas, chief economist at RSM.

“My sense is that the public doesn’t quite understand — nor do policymakers, for that matter — the fiscal cliff that awaits the economy in just six weeks,” Brusuelas said.

Six weeks is about when those additional unemployment payments end. Dazzling increases aside, retail sales are still 8% off their January peak. And lots of businesses will come back, but some won’t. David Swartz is an equity analyst at Morningstar research.

“There’s a lot of bad news out there suggesting that more stores will be closing, more restaurants will be closing and that some people will be permanently unemployed who right now may not understand that,” Swartz said.

The Federal Reserves forecasts that at the end of the year — another six months from now — the unemployment rate will be 9%.