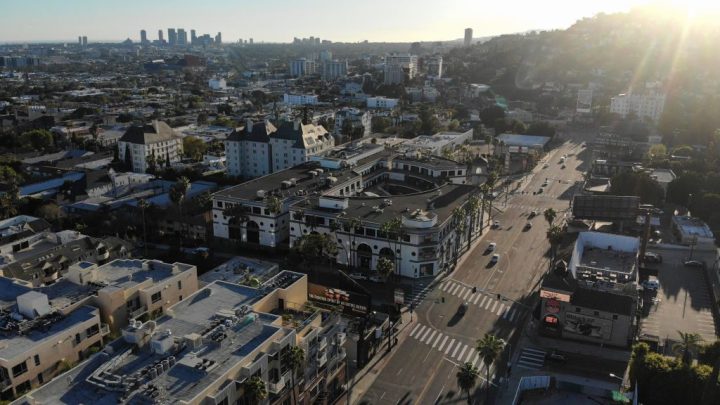 Environmental Protection Agency data from March shows that Los Angeles had its longest stretch of air quality rated as "good" since 1995 as residents were under Safer-at-Home orders. Mario Tama/Getty Images

Environmental Protection Agency data from March shows that Los Angeles had its longest stretch of air quality rated as "good" since 1995 as residents were under Safer-at-Home orders. Mario Tama/Getty Images

At the height of the COVID-19 pandemic, when much of the world’s population was told to stay at home, driving and flying plummeted. Headlines heralded the clean air that resulted, and the promise of a reimagined world on the other side.

For all the hardships that the economic hard-stop created for millions of people, there was at least hope there would be a long-lasting benefit for the environment. Cities would build on slow-streets initiatives, businesses would invest in green efforts, and governments would look to environmentally friendly stimulus programs.

The real picture is much more complex, and the effects may quickly evaporate.

Climate change is already having an outsized impact on the poorest communities, and not addressing it could exacerbate those effects, increasing inequality. Experts warn that without concerted efforts, the coronavirus could have exactly that effect, and lead to reduced investment in environmental initiatives, as corporations and governments look to close the gaping holes left in budgets by falling profits and revenues.

“Coronavirus will shift global attention and resources away from addressing climate change, putting the issue on the backburner,” according to the new “Top Risk Report” from political consultancy firm, the Eurasia group.

There’s some precedent here when it comes to corporate spending. Researchers who looked at sustainability initiatives during the Great Recession of 2007-2009 found that companies cut back on their green spending, though not consistently. Rajat Panwar, who studies sustainable business at Appalachian State University, looked at the effect of the downturn on small manufacturing firms. He found that firms that haven’t built sustainability into their core business models, or corporate identities, did cut that spending. “They almost take it as it’s a philanthropic act, and when money is tight, philanthropy is cut,” he said.

Panwar said companies like electric car maker, Tesla, or Patagonia, which has built an ethical clothing reputation, will probably continue any environmental investments they are already making, because they are central to their businesses. Other companies will “decouple” their core activities from their extracurricular initiatives, which will then be vulnerable to cuts. Any program which doesn’t directly contribute to an immediately healthier bottom line will be vulnerable. Spending on energy efficiency, like solar panels or low energy lighting, has a payback period measured in decades, for example. and could be put off in the near future. Panwar expects to see waste management spending increase, but not because of investments in recycling. Companies are generating more waste as part of efforts to sanitize work environments, from disposable wipes and gloves to single-use plastic bags.

The precedent for government spending doesn’t look promising either. Unlike federal budgets, state and local budgets have to be balanced, which restricts their options when tax and other revenues fall, as they have during the pandemic.

“The only way states can create more space in their budget is to cut, and we are mostly talking about services,” said Rhiana Gunn-Wright, director of climate policy at the think tank, the Roosevelt Institute.

“Environment is one of the first things that often goes.”

Local initiatives to weatherize and insulate homes, for example, may have long-term positive impacts on utility bills and emissions, but in the short term, they seem low priority, and are politically much easier to cut than many other programs.

New York has already cut a composting program, and California is cutting plans for a $1 billion fund for loans for environmental projects.

There are opportunities to rebuild economies with green initiatives at the forefront, and there are calls from academics for a “green stimulus plan” at the federal level for the U.S. But Gunn-Wright said there’s little chance of seeing a plan like that enacted by the Trump administration, which has continued its rollback of existing environmental protection programs while the pandemic has been raging.