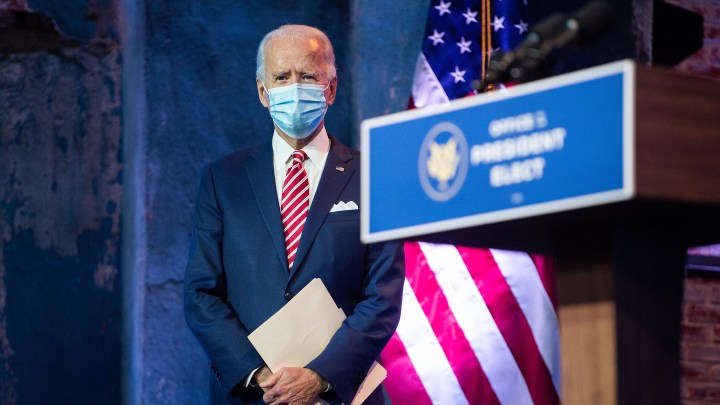 With COVID-19 cases continuing to raging out of control, the incoming Biden-Harris administration has laid out an ambitious pandemic response plan.

President-elect Joe Biden’s team now has access to transition resources from the federal government, allowing it to begin laying the groundwork for a variety of new pandemic initiatives. What is it going to take to implement them?

According to Diane Heith, professor of government and politics at St. John’s University, there’s a lot Biden can do from day one.

“Because so much of it is really about coordination and changing the communication and the messaging around the COVID response,” Heith said.

The Biden-Harris team has already started to work on the messaging part, holding meetings, press conferences and panels with health care workers. Tom Frieden, a physician and former director of the Centers for Disease Control, said another thing the Biden team can do right away is just create and communicate a plan.

“We still lack a clear national plan for what to do about coronavirus,” Frieden said. “And that involves standardizing some of the actions across the country and providing a framework for state and local innovation.”

Frieden expects that work will start right away once Biden takes office, through a series of executive orders “on everything from interstate travel to how data can be reported and provided openly so that everyone can see it.”

Frieden is now president of Resolve to Save Lives, an initiative focused on preventing epidemics. He said that for smaller initiatives, like setting up task forces and data coordination, “there are usually small amounts of money in different accounts that can be ‘scraped up,’ as is said, and used, but it’s nothing close to what’s needed.”

And the federal government’s power to address every aspect of the pandemic is limited.

“Most of the direct actions are going to have to take place at the state and local level,” said Joel Zinberg, a physician and a senior fellow at the Competitive Enterprise Institute. “And I think President-elect Biden recognizes that, when he said there’s not going to be a national shutdown, that this is something that has to be done in every community differently.”

Even at the federal level, Biden will need Congress on board to fund proposals like doubling the number of drive-thru testing sites and creating a “public health jobs corps.”

“The simple way of looking at this is that anything on Biden’s list that requires funding requires Congress,” said Laura Blessing, a senior fellow at the Government Affairs Institute at Georgetown University. “There are some slight nuances to that, of course, [because] there are different piles and piles of money in certain federal agencies. But, basically, if you’re going to appropriate money for it, you need Congress.”

Who controls that branch of government? That’s still being determined.