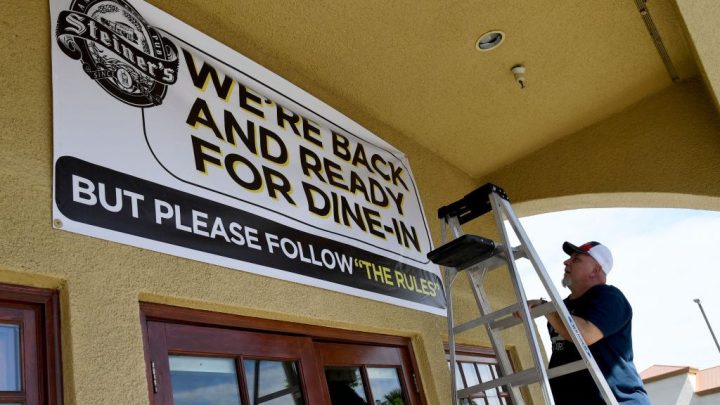 No one saw this one coming. Many were expecting 7, maybe 10 million more jobs lost in the May jobs report. Instead, 2½ million jobs were added back, and the unemployment rate actually fell.

Of course, that’s after about 22 million jobs were lost in March and April, and unemployment spiked to 14.7 percent, higher than any time since the Great Depression. However, it looks like progress.

So, what’s going on?

Let’s start with Adam Ruffolo. He’s 34 and a dental-office assistant in Austin, Texas.

“Beginning of the third week of March, they let us know that just due to COVID-19 we’d be closing the office,” he said. Ruffolo got on unemployment, then in mid-May, when Texas started reopening, he was called back.

“It’s great. You know, I much prefer the work to sitting around not doing anything,” he laughed.

Now, multiply Ruffolo by about 2.5 million, and that’s how you get a massive job increase in May with a pandemic still raging.

University of Michigan economist Betsey Stevenson said dentistry is actually a perfect microcosm of how service jobs are returning. It’s a business in which people have to be face-to-face, or mouth-to-sharp-shiny-instrument.

“The economy started to open up, people went back to the dentist,” she said. “So dentists’ offices accounted for a full 10% of the job gains last month.”

However, about 30 percent of people who worked at dentists’ offices before the pandemic so far haven’t been called back. Stevenson said consumers are still afraid of getting sick and hesitate to spend their money. So dentists “are still not needing all their workers because fear and loss of income is holding back demand.”

More than half the jobs that returned in May were at bars, restaurants, casinos and the like. Joe Brusuelas at RSM Consulting saw the turnaround in real-time consumer activity.

“Stores opening, TSA data and road congestion — all of which clearly implied that the worst was behind us and a very modest recovery had started,” he said.

But, he said, it could be years before people go back to eating out and traveling like they used to, and all those workers have jobs again.