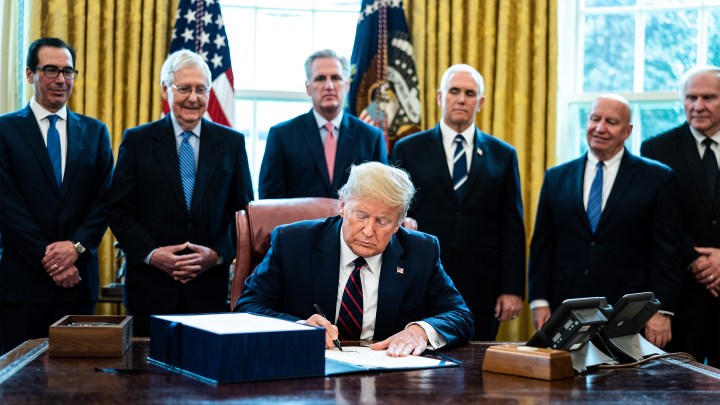 Some startling numbers from the Bureau of Economic Analysis were released Friday showing personal income rose by 10.5% in April.

Also, last month about 20 million people in the U.S. lost their jobs as the coronavirus pandemic hit many businesses. But people still had more money in their pockets than a month earlier.

At the end of every month, the federal government adds up all of the money we’ve made that month from wages, interest, dividends and even government benefits. Then the Bureau of Economic Analysis spits out the personal income number, showing how much income went up or down. It doesn’t usually make headlines. But the April number made economists’ jaws drop.

“It tells us this is a very weird moment,” said Jason Furman, a Harvard economist and former chair of the Council of Economic Advisers. He said incomes went up last month because of the $1,200 relief checks most U.S. adults are getting. Plus, the government tacked an extra $600 a week onto unemployment payments.

“The government has protected people’s incomes from the large decline that otherwise would have been caused by the economy,” Furman said.

“Income for the month of April would have gone down substantially,” she said. “Instead of being up 10%, we would have been down roughly 5%.”

Most of the relief checks have already been sent out. So what will personal income look like for May? Ernie Tedeschi, policy economist at Evercore ISI, said the personal income number for this month will probably make headlines again because it will drop.

“Because these stimulus payments are one-time, and after they’re sent out, they go away,” Tedeschi said. “It’s not clear if Congress is going to do another round at all, but we’re at the end of May. We know that there’s not going to be another round in May.”

Tedeschi said the government will keep adding the $600 to weekly unemployment payments, but that’s set to expire at the end of July.