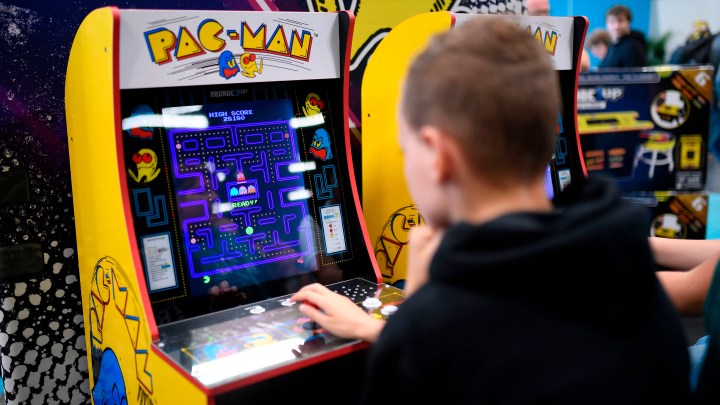 COPY
A key part of Pac-Man's success was that he was an actual character — one of the first video game heroes. Ina Fassbender/AFP via Getty Images

A key part of Pac-Man's success was that he was an actual character — one of the first video game heroes. Ina Fassbender/AFP via Getty Images
Listen Now

The year was 1980, when cool kids with a few quarters hung out at the arcade. Elouise Oyzon was in high school and not really into video games, because they were all a bit dark and violent like Space Invaders, where the player shoots at aliens.

But then a new game called Pac-Man caught her eye.

“There was this little island of color and cuteness,” Oyzon said. “So yeah, I gravitated straight to it.”

The game, from Bandai Namco Entertainment in Japan, had a fun concept with a bold design. And it had great music.

“It was sort of this happy little tune, and there was this little moon-yellow thing that was chopping away at it,” she said. “This little circle thing going, ‘Waka, waka, waka!'”

Pac-Man was Oyzon’s “gateway game.” And in some ways, it changed her life. Today, she’s a professor at Rochester Institute of Technology’s School of Interactive Games and Media. And it turns out that she was Pac-Man’s target audience: a nongamer and a girl.

Gaming has become a huge industry since the days of Pac-Man, from arcades to early home consoles — like the Sega Genesis — to today’s popular Nintendo Switch. According to NPD Group, spending on video games reached a record high in the first quarter of 2020, as people began spending more time at home because of the coronavirus. And modern games owe a lot to arcade classics like Pac-Man.

Forty years ago, most arcade games were marketed to boys. Pac-Man’s creator, Toru Iwatani, wanted to make a mass-market product that nongamers and girls would love, too. So he dreamed up something everyone could relate to.

Even Pac-Man’s shape comes from food.

“He was inspired loosely by a pizza with the slice missing,” Lee said.

A key part of Pac-Man’s success was that he is an actual character — one of the first video game heroes.

“Before this, you sort of had to imagine yourself, you know, behind the wheel if you were playing a racing game or inside the spaceship or whatever,” said Frank Cifaldi, who co-directs the Video Game History Foundation. “But with Pac-Man, you were directing a movie in a way.”

Today, nostalgia for the game is strong. The smartphone version is downloaded 20 million times every year by people of all ages, according to Namco — even those too young to have ever walked into an arcade with a pocket full of quarters.