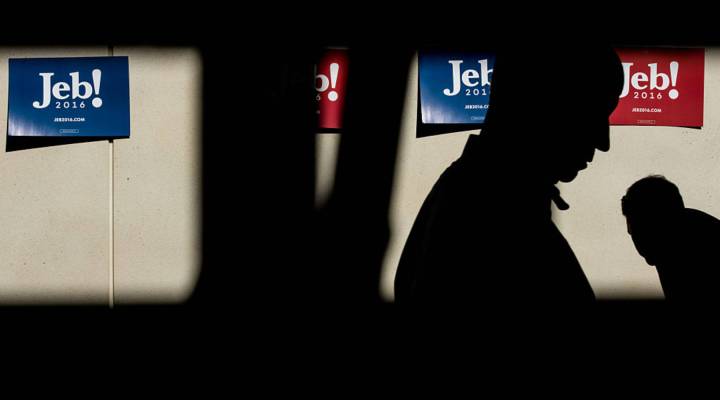 Primary season is in full swing and the number of candidates in the presidential race is shrinking. With Super Tuesday votes behind us, eyes are on who stays in the race and who decides to drop out. It’s especially important when money’s involved. The day after the South Carolina primary, Jeb Bush — unable to get double digit percentages in the primaries despite the millions of dollars poured into his campaign — called it quits. Earlier in the race, Scott Walker and Rick Perry also had big donors behind them, but they dropped out as well, causing some donors to get refunds on their donations.

So what happens to these mega-donors once their candidate quits? What goes into their decision to support a candidate? Do they sit out of the election if the campaign they back ends? Or do they switch their support to another candidate?

It’s most likely donors will to keep their money in the race. For some, their political party might be the next stop. “Parties can receive contributions, too” said Abby Wood, assistant professor of law, political science and public policy at USC. “If you don’t want to be lead by Trump, maybe the thing to do is give to the Republican party,” she said. “The party can protect various senate seats that are going to be challenged, congressional seats, state candidates — there’s a lot that the party can do.” However, the amount that can be donated to the party is limited, whereas donating to a PAC is unlimited.

For other wealthy donors, they might just move to back another presidential hopeful. While there’s no knowing for sure, a few experts gave us their educated guesses on who the race’s top 10 donors might turn to next if their candidate drops out:


Donald Trump touted himself as the “self-funded” candidate because he has financed the majority of his campaign with his own money, while technically that money is on loan to the campaign. That makes him the biggest contributor to a campaign on this list. However, unlike other donors, there’s only a slim chance Trump would put his money behind another candidate if he drops out — financially or with an endorsement.

Political science professor ​Robin Kolodny of Temple University said Trump has made that pretty clear. “He would not support any of the candidates in the field. If he drops out, he’s either going to make good on his threat … that he would run for third party,” said Kolodny. “Or, he would just say the country’s doomed.”


Hedge fund co-CEO Robert Mercer of Renaissance Technologies contributed $11.3 million dollars to the Keep the Promise PAC supporting Ted Cruz. He also donated to other PACs, including congressional races and former congressman Bobby Jindal’s campaign for presidency. However, little is known about his political opinions other than his conservative donating record.

Hans Hassell, assistant professor of politics at Cornell University suggested a donor like Mercer might move support from Cruz to Rubio in the event that Cruz dropped out of the race. “Given who he has donated to in the past, he will probably donate to a similar, like-minded conservative — maybe someone like Marco Rubio,” he said. “But this sort of thing is not always consistent.”

“He’s a son of a Texas Republican. This is a social connection, right here. He has connection to Cruz, he has connection to (Rick) Perry,” he said, adding that the next connection would have been Jeb Bush, but, of course, Bush dropped out. Neugebauer previously donated to Rick Perry, the former Texas governor that was also in the race for president. With Bush and Perry out of the race, Cruz is the only Texan left. As of now, Neugebauer has yet to donate to another candidate.

“I would be absolutely shocked if Soros backed out of the process,” said Hans Hassell, assistant professor of politics at Cornell University. The philanthropist has a long history of donating to political causes, he added. In the event Clinton drops out of the race, Soros would probably back Sanders. “Soros has a long history of working with MoveOn.org, and MoveOn.org supports Sanders,” Hassell said. “I don’t think Bernie Sanders is as far out there as Trump is in terms of being able to draw support from people that are not currently donating to him.”


Norman Braman has an extensive relationship with Marco Rubio. Rubio has gone as far as calling Braman a “father figure” reports The New York Times. He is is the owner of Braman Motorcars and the former owner of the NFL’s Philadelphia Eagles. Braman, like Rubio, lives in Florida. He donated $200,000 to Reform Washington, a PAC backing the current Florida Lieutenant Governor Carlos Lopez-Cantera’s bid for the U.S. Senate. Up to this point, Braman donated $6 million to Conservative Solutions PAC, supporting Marco Rubio. However, reports earlier in the race suggest that he will continue to contribute more to Rubio’s campaign.

With strong ties to Rubio, it’s hard to imagine who Braman would back if Rubio dropped out. Christina Greer, associate professor of political science at Fordham University said she “could see him going with Cruz.” However, “it’s hard to say,” when a donor like Braman switches support to someone else. “It a question of when does Rubio get out and under what circumstances?” said Greer. “If it’s earlier in the season a lot of donors still want to be in the game.”


Kelcy Warren is CEO of natural gas company Energy Transfer Partners. Warren was born, raised and educated in Texas, and his company is based out of Dallas. He supported former Texas governor Rick Perry in his bid for White House,donating $6 million to the Opportunity & Freedom PAC. When Perry dropped out, Warren received a refund of more than $4 million. Perry went on to endorse fellow Texan Ted Cruz.

Matthew Dallek, an assistant professor of political management at George Washington University, said going with Cruz would be the next step for Warren. “Perry and Cruz are from the same state, both hard-line conservatives, so that would be a logical place for [Warren],” he said.


The Wilks are also a Texan family. The Wilks Brothers — Farris and Dan Wilks — founded Frac Tech, a hydraulic fracking company. Farris Wilks and his wife Jo Ann Wilks have each donated $5 million to Keep the Promise III, a PAC supporting Cruz.

Like other Texan donors, the Wilks have regional ties, but they also have business interests. “They’re backing Republicans, but not just Republicans — Texas Republicans. I think there’s a sense that they really trust Texans on oil and gas and energy issues,” said Matthew Dallek, an assistant professor of political management at George Washington University. He said the Wilks might’ve turned to Bush if Cruz dropped out, but now that Bush is out of the race, Rubio would be the next best bet.

“Rubio’s policies on energy and global warming and the environment are very much in line with where conservative Republicans are,” Dallek said. “So, I’m sure that if they did decide to give to Rubio, they would feel like it’s in their ideological interests and also in their business interests.”


Self-made billionaire Diane Hendricks of Wisconsin is co-founder of the Hendricks Holding Company and the roofing supply company ABC Supply. She grew up in Wisconsin and serves on the board of several foundations, including the non-profit public affairs cable network channel “WisconsinEye.” She is a longtime donor to the Republican party of Wisconsin and Scott Walker supporter. This election cycle she donated $5 million to Unintimidated PAC, backing Walker as well as $2 million to the Freedom Partners Action Fund, a conservative PAC linked to the Koch brothers.

Matthew Dallek, an assistant professor of political management at George Washington University said Hendrick’s donating patterns follow that of “home state billionaires and multimillionaires supporting home state candidates, or home region candidates.” With fellow Wisconsinite Scott Walker out of the race, she has yet to back another candidate.


Marlene Ricketts is the wife of TD Ameritrade founder Joe Ricketts. The Ricketts family owns the Chicago Cubs baseball team and have been involved in politics for years. Their son Pete Ricketts is the current governor of Nebraska. They rallied against earmarks with their Ending Spending PAC. In 2012, The New York Times reported that Joe Rickett funded a plan to “defeat”President Barack Obama’s spending. Marlene Ricketts donated $4.9 million to the Unintimidated PAC supporting Scott Walker, and $4 million of that contribution was refunded.

Hans Hassell, assistant professor of politics at Cornell University, said this large donation also may have regional ties. “Scott Walker support is probably because of connections from the upper midwest so, there’s a connection to Walker because of where he’s from,” he said.

However, Ricketts also donated much smaller amounts to PACs backing other Republican candidates. “She’s given bits to other candidates, most of whom are gone now,” said Matthew Dallek of George Washington University. “It may be that — because she’s given to both Ted Cruz and Marco — she’s waiting to see who emerges before choosing one.”