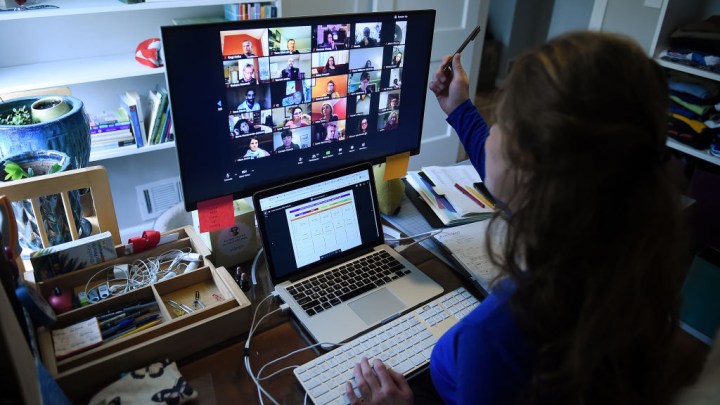 COPY
Starting a new job during these times involves a lot of video chat. Olivier Douliery/AFP via Getty Images
COVID-19

Starting a new job during these times involves a lot of video chat. Olivier Douliery/AFP via Getty Images
Listen Now

Hard as it may be to believe, given the staggering unemployment numbers, there are businesses that are bringing on new employees.

It’s not just at grocery stores and warehouses, but for positions that are fully work from home. So what’s it like to be hired, remotely, in the middle of a pandemic?

“I haven’t been to the office. I’ve never seen the office,” said Tristan Hall, who started his new job as a software engineer in Raleigh, North Carolina, a few weeks ago. “I don’t know where my desk is. I don’t know if I have a window I can look out, if I’m right next to the bathroom.”

Hall, who’s at home for now, interviewed while on lockdown. He was dressed up in a suit, bow tie and even shoes, he claims. He’s had virtual meetings, virtual lunches — although, at least the kebab HR bought him was real.

“She’s like, ‘Where do you want to eat? You know, like, we’ll do a DoorDash,'” Hall explained. “And, yeah, I ate in front of a computer screen while the other person on the other side of the screen ate as well.”

It’s weird, but it’s a weird time for such a big transition, for new hires and employers alike.

“We’ve now had four people onboarded. And each one’s been a little better,” said Alicia Harmon O’Meara, who heads HR at Edmodo, a distance learning company near San Francisco.

For its first remote hire, Edmodo FedExed a company laptop, but it was late so the employee had to use his own, which didn’t go smoothly.

“So literally that first Monday, I just got on the phone with him to say, ‘Hi, I’m here, you do have a job. I just don’t know how to get you part of that job,'” O’Meara said.

But there’s more to onboarding than training — there’s the whole social thing.

“Am I gonna fit in with my team? Am I gonna click with everybody and get along with my boss?” said Robert Down, who just started a new job in data analytics for a hospital in Orlando, Florida.

He transitioned from being a bedside nurse, so he’s not used to working alone, and he’s feeling guilty while his former colleagues are on the frontline.

“I’ve already talked to my boss and said, ‘Man, I’m just not as productive as I think I would be,'” Down said. “And he was reassuring and basically said, ‘Yeah, nobody is right now.'”

The social part of onboarding is just simply more difficult right now, says Jill Chapman with the HR services firm Insperity. She says all those goofy team-building exercises — like when a coworker takes somebody around their apartment or home over video, or introducing pets and kids — that stuff is important right now. Even if everyone else is kind of over it.