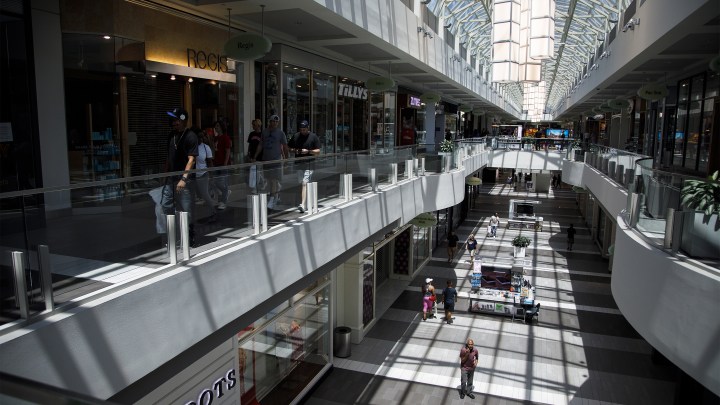 COPY
A reopened mall in Franklin, Tennessee, on May 2. Going shopping is likely to look quite different for awhile. Brett Carlsen/Getty Images
COVID-19

A reopened mall in Franklin, Tennessee, on May 2. Going shopping is likely to look quite different for awhile. Brett Carlsen/Getty Images
Listen Now

We’re starting to see stores that aren’t supermarkets and pharmacies reopen, allowing customers back in. Simon Malls has reopened some of its locations. Macy’s is reopening 68 stores. And other retailers are preparing to do the same. But reopening during a pandemic means rethinking everything about how a store operates.

Think about what used to happen when you walked into a clothing store. You were greeted by someone probably standing less than 6 feet away. You’d browse the racks. Touch a bunch of things. Then you’d grab an armful of pants or shirts, try 10 things on, hand nine of them back. And then head to the register, where you’d interact closely with a cashier.

All of this will have to change.

The precautions will start at the door, said Kimberly Pedrick, who owns a small clothing and jewelry store in New Haven, Connecticut, called Idiom.

She said she will limit the number of customers in her 1,000-square-foot store and require them to use hand sanitizer, which will be placed near the door.

Customers will also have to wear face coverings, and she is going to remove the racks from the middle of the store to help people stay away from each other.

The fitting rooms will be open.

“My hope is if everybody uses the sanitizer upon entry and wears a face mask the entire time they’re in the store, even when they’re trying something on, that hopefully that’ll minimize the amount of exposure to the garments,” Pedrick said.

Of course, you can’t control what customers do when they’re in the privacy of a fitting room.

Pedrick said she might also set aside clothes that customers try on for some period of time, just in case. That’s something big retailers like Macy’s and Nordstrom are doing.

Stores are also putting up plexiglass barriers at their registers. And Nellie Brown, who teaches workplace safety at Cornell University, said retailers could consider posting signs that say: “Please don’t touch an item unless you truly are interested in buying it. Or if it’s a piece of clothing, you know, if you’re truly interested in looking at it.”

Doesn’t sound like much fun — and that’s something to keep in mind right now. If you’re feeling confined at home and hoping that soon you’ll be able to go shopping as a recreational activity, that’s not what things are going to be like for a while.

Sonia Lapinsky, a managing director at Alix Partners, said retailers need to take all these precautions.

“If they don’t do it right, and they don’t communicate that they’re doing it right, then they’re not going to get the customers in,” she said. “There will be no traffic and no shoppers.”