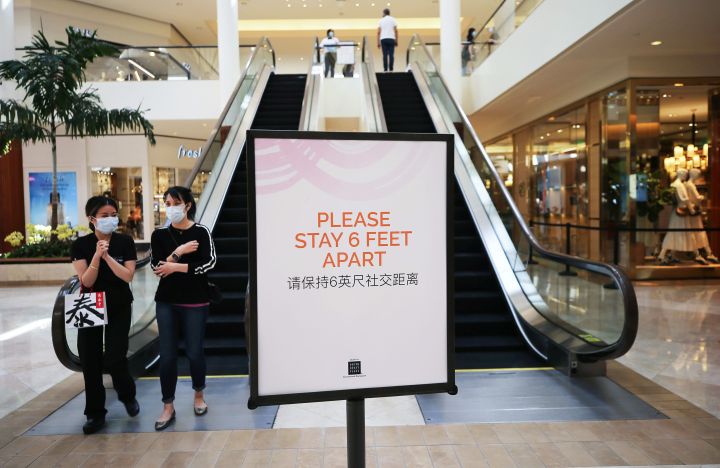 Roughly six months since the coronavirus pandemic took over the U.S. economy, many cities and states are moving toward recovery. Businesses in those places are open to the public, and schools are back in session. Butte, Montana, is a case in point. With back-to-school shopping in progress and a freshly renovated movie theater, the Butte Plaza Mall has seen foot traffic increase since the state ended the shutdown of public spaces it implemented in March. But this comes after years of big retailers struggling to stay afloat across the country.

Last year, an empty department store was converted to office space for a call center, bringing much-needed jobs and customers back into the mall. Marketplace host Kai Ryssdal caught up with the mall’s manager, Alana Ferko, to talk about navigating the industry’s obstacles and opportunities in these times. The following in an edited transcript of their conversation.

Kai Ryssdal: The interesting thing about it is that it’s different depending on where you live. And I gather in Butte, it’s not been terrible and you guys are getting back to some kind of business and things as normal.

Alana Ferko: I will say we, we are blessed. It has not been terrible. None of us can say that we’re embracing any sense of normal, that we are rebuilding some of our routines.

Ryssdal: So are all the stores in the mall open now? Do you have people coming in and all of that?

Ferko: We have people coming in. We’re waiting for one of our restaurants to reopen. He’s reopening, hopefully this week, for takeout. Our theater opened. But then all of the movies were pretty stale. So they closed, but they are reopening again on this Friday. So we’re doing the best we can.

Ryssdal: A regular feature of our conversations are those folks who come and walk the mall. Are they still there?

Ferko: I actually have suspended walking until we are in our phase three. That has been the hardest thing, that has been superhard. These people are my friends. A lot of them I saw more than I see some of my family. This has been hard, but the silver lining is the weather has been beautiful, which is good for them. I mean, especially considering the circumstances where a lot of people are suffering a little bit of depression. So yeah, send them outside to get some sunshine.

Ryssdal: What’s foot traffic like? I mean, not the walkers, but people actually coming in to shop. Are your tenant stores able to do what they need to do to keep going?

Ferko: They are, they actually are, and there has been the recommitment to shop local. So our jewelry stores are doing well, our Hallmark store. We’ve got one store that sells, I don’t know if I should say their name — but they sell hand soaps and good-smelly stuff. They are doing extremely well.

Ryssdal: Well, good. I’m glad they’re doing well. All right. So that’s the stores. What about the consumers? I mean, I’m sure you have mask requirements and all of that, and you’re in charge of managing a public space. Are people following the rules?

Ferko: They are. People have just been so gracious. Every once in a while, you’ll have to remind someone, but you know, still it’s a choice. If you choose not to wear a mask, you also choose not to come inside.

Ferko: That’s the rule. That’s the rule, yes. And our governor did mandate masks on July 15th. But actually, we enacted our own mask requirement earlier than that when we opened on April 27th. We all decided it was the best thing, especially if it kept us from getting shut down again.