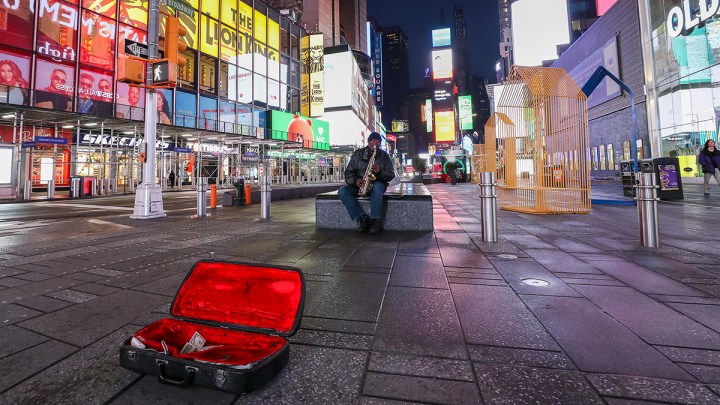 COPY
"We've done this before. We've built whole infrastructures to deal with fire risks in American cities that used to burn to the ground on a regular basis." Arturo Holmes/Getty Images
COVID-19

"We've done this before. We've built whole infrastructures to deal with fire risks in American cities that used to burn to the ground on a regular basis." Arturo Holmes/Getty Images
Listen Now

The well-documented administrative challenges of getting stimulus checks and small business loans into the right hands during the COVID-19 crisis might be a teachable lesson for how to ensure similar problems don’t happen again the next time the country experiences a major crisis.

Jeb Brugmann, founding principal of Resilient Cities Catalyst, a nonprofit that helps cities rebuild after major crises, says shoring up our economic infrastructure is critical if we want to deliver quick, effective relief to vulnerable individuals and businesses in the future.

Brugmann spoke to “Marketplace Morning Report” host David Brancaccio about how to prioritize resilience as we recover from the coronavirus crisis. The following is an edited transcript of their conversation.

What we really need to do is figure out how we strengthen both the small business community and low-income households to be able to weather these kinds of shocks.

David Brancaccio:  Over the years, we’ve examined this idea of resilience for cities and regions — the idea that there are policies that can help a place be in a much stronger position when bad things happen. Here we are: A bad thing has happened. In what ways do you think resilience could help us moving forward?

Jeb Brugmann:  The current crisis is exposing that we need to build out a full infrastructure for, in particular, our local economies and the distressed communities around our country where about 100 million people live. We’ve done this before. We’ve built whole infrastructures to deal with fire risks in American cities that used to burn to the ground on a regular basis.

Brancaccio: What do you think some of the priorities should be as we move forward?

Brugmann: When I think of it as an economist, I look at two highly exposed vulnerabilities in the national economy that trickle down to our local neighborhoods and communities. The first thing is the U.S. economy is extremely dependent on personal consumption expenditures. About 27% of the GDP in the United States is consumption expenditures by households that make less than $70,000 a year. So when those households, like today, get hit very hard with layoffs, and those consumption expenditures drop, it has a trickling down impact on the small business community. And so what we really need to do is figure out how we strengthen both the small business community and low-income households to be able to weather these kinds of shocks.

Brancaccio:  So a disaster happens, government mobilizes, perhaps the federal government hands out a bunch of resources and a bunch of money. But what the regions, or the cities, or the towns need is a way to get the money into the hands of people who need it quickly. So that could be a resilience initiative that comes out of this pandemic crisis.

Brugmann:  And that’s why I call it infrastructure. This is really about putting institutional mechanisms in place or strengthening the ones that are already there so that there is a response. So that, within a week, funds can get out of the door to the most vulnerable local businesses and households.

But we have a whole infrastructure in the United States of community development finance institutions, local cooperative banks, community development corporations. And I think what we need to do is support them having a capacity in order to have these response mechanisms, and to be able to link up quickly with the state and federal governments in order to move money quickly back into the economy when it’s down on its knees.