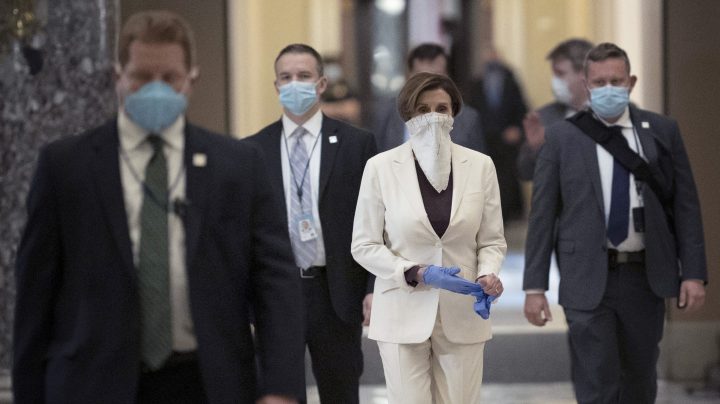 U.S. Speaker of the House Nancy Pelosi returns to her office after the start of the vote on the latest stimulus package. Win McNamee/Getty Images
COVID-19

U.S. Speaker of the House Nancy Pelosi returns to her office after the start of the vote on the latest stimulus package. Win McNamee/Getty Images

Congress has approved a nearly $500 billion COVID-19 relief package, which will now head to the White House for President Donald Trump’s signature.

The House approved the measure in a 388-5 vote today, following Senate approval on Tuesday.

The package includes more than $320 billion in funding for the Paycheck Protection Program, which provides loans to small businesses.

The government initially gave about $350 billion to the program, which drew criticism after major companies received loans. Publicly traded companies got more than $500 million in small business loans, in aggregate, according to an analysis from the Wall Street Journal.

In response to the backlash, the Small Business Administration released new guidance today stating that public companies will have until May 7 to return aid. Some companies have already returned the funds, like Shake Shack, which received $10 million in loans.

According to the SBA statement, borrowers will have to demonstrate “that their PPP loan request is necessary.”

“It is unlikely that a public company with substantial market value and access to capital markets will be able to make the required certification in good faith,” the SBA said in its frequently asked questions section.

As part of the relief package, $75 billion will go to hospitals, $60 billion will be earmarked for the Economic Injury Disaster Loan program and $25 billion will fund COVID-19 testing.