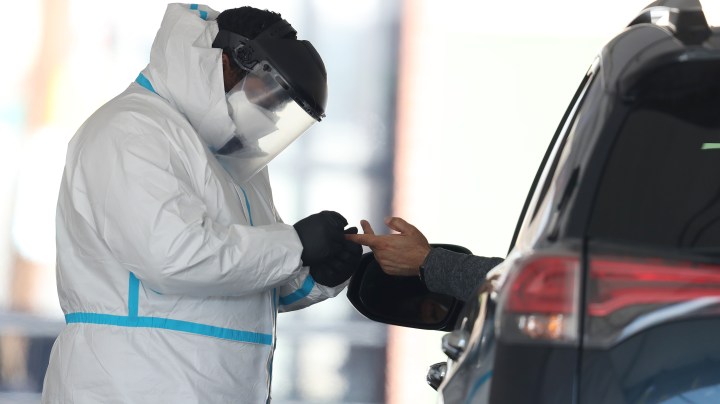 COPY
FDA deregulation of COVID-19 antibody tests has led to a false sense of security for some, an unintended consequence of the move. Al Bello/Getty Images
EEC: Econ 101

FDA deregulation of COVID-19 antibody tests has led to a false sense of security for some, an unintended consequence of the move. Al Bello/Getty Images
Listen Now

You can clearly see the role of the government in the economy in the news stories this week about the 90 or so firms now producing tests for COVID-19 antibodies to see if you had it and recovered.

It’s becoming clear that some of those tests have high failure rates, and after the Food and Drug Administration deregulated this in March, it’s getting stricter again now.

Deregulation possibly leading to tests that give a false sense of security would be an unintended consequence, something economists obsess about.

“A policy is better the more of these unintended consequences it takes into account before the policy is administered,” said Homa Zarghamee, an economics professor at Barnard College who advises Core Econ, the publisher of the open-source economics textbook “Marketplace Morning Report” host David Brancaccio is reading with listeners.

“Even then, there are still unintended consequences, insofar as there are unanticipated effects that might occur.”

The following is an edited transcript of the conversation between Zarghamee and Brancaccio.

David Brancaccio: One example is, remember the Reagan-era war on drugs: The idea was to use the military to stop the supply. But there was a big unintended consequence.

Homa Zarghamee: The interesting unintended consequence there was that while the program was arguably successful in reducing the quantity of drugs, because the increase in price was disproportionately large, the total revenues of the cartels increased. And that meant that they had more money to reinvest into their operations. And so there were all these unintended consequences having to do with that policy.

Brancaccio: Also playing out in current events here, we have this lockdown in parts of the United States: sheltering in place, huge economic cost, but a huge public health benefit. And still, some unanticipated benefits and some unanticipated, terrible costs.

Zarghamee: Exactly. So some of the costs are very, kind of, clear. There’s a fallen economic activity in GDP, there’s a rise in unemployment. But then there are some that are less anticipated, like the rise in domestic violence that’s been charted in a number of U.S. cities. In terms of positive consequences, I mean, one can look at car accidents.

Brancaccio: In California, the rate of accidents has been cut in half since the shelter in place. I saw data from China that carbon dioxide, linked to climate change, down 25% when they had to shut their economy down.

Zarghamee: Exactly. So some of these unintended consequences again, they’re not the objectives of the policy, but they’re having these beneficial effects as well. So in addition to that, there’s been a fall in crime rates in many U.S. cities. And this, kind of, now famous fact that March was the first March in years that there hasn’t been a school shooting.

Brancaccio: But still, policymakers have to continue to figure out ways to think about the wider consequences of this traumatic policy. There was a group of eminent people at Johns Hopkins, who are wrestling with this, and they’re all for the lockdown because it saves lives. But they also point out that while the virus is lethal, so is poverty and economists want us to take that into account.

Zarghamee: Yeah, exactly. I mean, these unintended consequences, they can be anticipated and clearly the government did anticipate this to some extent, in its pairing the staying at home policy with the congressional package and other fiscal and monetary policies. And then, as far as poverty rates are concerned, then you can kind of look across countries at policies that are aimed more specifically at dealing with poverty and ones that are aimed more specifically at trying to help businesses.