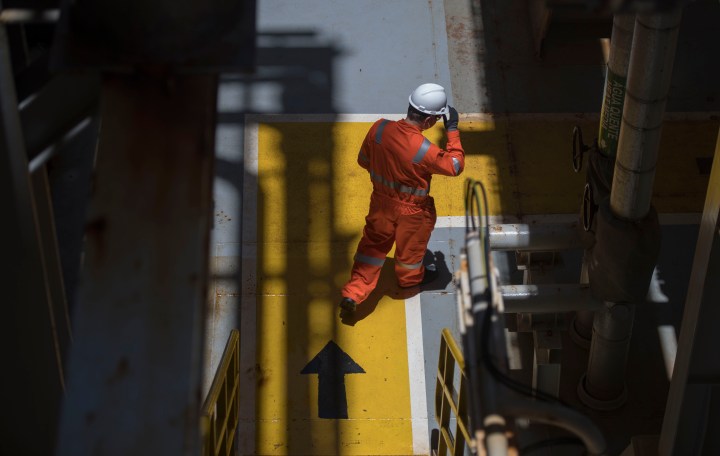 COPY
Oil prices have turned negative amid this historic rout. Does that have implications for consumers? Mauro Pimentel/AFP via Getty Images

Oil prices have turned negative amid this historic rout. Does that have implications for consumers? Mauro Pimentel/AFP via Getty Images
Listen Now

Negative prices. The total value of U.S. crude wiped out in a single session. Demand continuing to slow.

What’s happened in the oil market over the last 24 hours has been historic.

The price of West Texas Intermediate crude for May delivery traded below $0 for the first time ever — at -$37.63 on Monday. By Tuesday morning, it rebounded to – $7.

Essentially, that means producers are paying buyers to take supplies off their hands. That’s because storage space is nearing capacity at the Cushing, Oklahoma, facility where WTI crude is delivered. Analysts expect storage tanks to be full within a matter of weeks.

Because the WTI oil contract requires buyers to take on the physical barrels of oil they bought in the open market, prices have plummeted as those investors sell their contracts in an effort to avoid responsibility for finding storage space — which has ballooned in price due to scarcity.

So, what happens from here, and will the plunge in crude prices eventually be passed on to consumers who want to buy gasoline for the cars or heating oil for their homes?

On the global edition of the “Marketplace Morning Report,” Harry Tchilinguirian, head of commodity research at BNP Paribas, answered these pressing questions.

Harry Tchilinguirian: What is quoted on the screen is still the May contract, which expires today. And not much activity, if you will, is going on in the May contract. It’s considerably lower. That interest has moved on to the June contract, as of last week, and so June is a better representation of where the market sees the price of U.S. oil.

Craig: The big problem here is there’s almost nowhere left to store this oil. So, is it inevitable that we will see big production cuts, both in the U.S. and around the world?

Victoria Craig: How soon could we see this start to happen?

Harry Tchilinguirian: It’s actually already happening. In essence, we’ve had a number of oil companies announce curtailments in production, and more prominently ConocoPhillips, recently. You just have to look at the number of active rigs drilling for oil and these have collapsed over the last three weeks.

Victoria Craig: So does that mean we should start to see the oil price tick higher?

Harry Tchilinguirian: I think we could start to see the oil price stabilize and find the floor. The real recovery in oil prices is going to come when demand returns. As you know, with economic activity locked down by confinement measures and social distancing, we’ll have to wait until those measures are progressively relaxed, globally, to see activity recover and generate the demand that will help lift oil prices.

Victoria Craig: We’ve seen the price of oil obviously collapse over the last couple of days. But there’s always someone at the other end of the trade who’s buying up these unwanted barrels of oil. So who are we talking about? Are those airlines or factories?

Harry Tchilinguirian: No, the more likely scenario is noncommercial or nonindustry players looking simply at the financial return in their investment. And, in which case, not having any particular interest in owning physical oil that needed to get out of the May contract before it expires today.

Victoria Craig: U.S. crude prices have moved pretty drastically, but Brent Crude, the international benchmark, isn’t faring as badly as West Texas Intermediate. Why is that?

Harry Tchilinguirian: That’s a very good question. There is a very big distinction in the nature of oil futures contracts. So in the case of the CME NYMEX WTI contract, if you hold on to your position right to the end, then you will be forced into a make-or-take of physical oil. Now, in the case of the ICE Brent contract, all you do is incur the financial loss at settlement, and you don’t end up saddled with a physical position.

Victoria Craig: Finally, then, what does all this mean for consumers?

Harry Tchilinguirian: I think it really depends on where you live in the world. In Europe, there’s a number of taxes that are applied to petroleum products, and that tends to act as a buffer, limiting the transfer from what happens on international markets to the retail level. In the case of the United States, these taxes are nonexistent. And as a result, you get a quick transfer from the international price into the eventually the oil products that we use like diesel and gasoline. So, it really depends where in the world. But on the other hand, even as the prices of these products that we use in our cars declines, unfortunately, for the consumer, if you are in a lockdown, you may not necessarily be benefiting from the lower prices, as you won’t be driving.