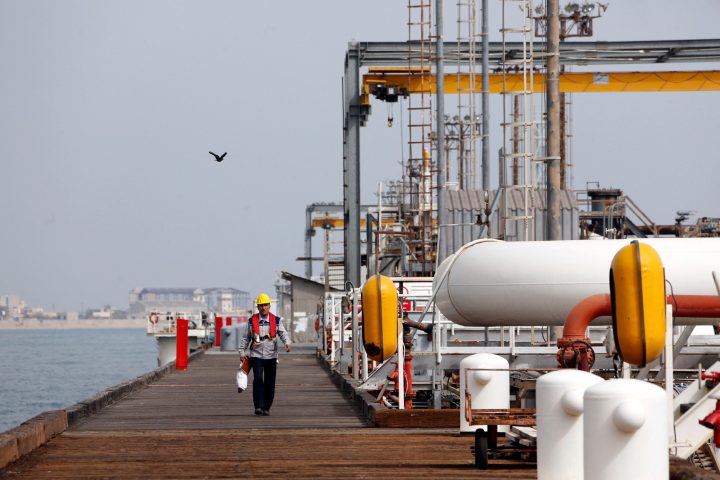 COPY
A picture taken on March 12, 2017, shows an Iranian labourer walking the platform of the oil facility in the Khark Island, on the shore of the Gulf. ATTA KENARE/AFP via Getty Images

A picture taken on March 12, 2017, shows an Iranian labourer walking the platform of the oil facility in the Khark Island, on the shore of the Gulf. ATTA KENARE/AFP via Getty Images
Listen Now

When we talk about the price of a barrel of oil, we’re talking about two benchmarks – one called Brent crude, mostly for oil from Europe and the Mideast – and West Texas Intermediate for oil from here in the U.S. But the oil market is made up of lots of buyers and sellers. And if producers want to sell their product at a discount – below whichever benchmark price applies – they can. That’s what Iran is doing to compete with Russia … selling oil to China.

Russia’s still producing more oil than it can use at home, so it has to sell some. But there aren’t many countries willing to buy Russian crude right now.

“It’s an interesting aspect of the supply and demand problem,” said Hugh Daigle, who teaches petroleum engineering at the University of Texas. “So what ends up happening is when there’s an oversupply, you end up selling it at a loss. And that’s what we’re seeing.”

That puts the buyers of Russian crude, like China and India, in the driver’s seat, because the price is still so low even once they’ve factored in the risk they’re taking by going against global opinion and policy.

With Russia selling at a discount, other sanctioned nations are being forced to follow suit. For instance, many countries, including the United States, have sanctions on Iranian oil. So, Ellen R. Wald, president of Transversal Consulting said, they’re slashing prices, too.

“Kind of like there’s a competition between the black market for oil,” she said, adding that Iran has been navigating that market for a while. “Iran has had that problem where it’s had a lot of its oil sitting in what’s called floating storage, because it already filled up its storage capacity. And then it’s got to offload that oil somewhere.”

But, now, getting rid of that sanctioned oil is tougher, because there is a new kid on the block.

“And so if their main competition right now for those barrels is what’s coming out of Russia, then they need to be able to match that price competitively. And if that involves dropping the price that they’re willing to get for their oil, then that’s what they’re going to do,” said Daigle at the University of Texas.

Daigle said Iran could keep cutting prices in order to sell oil because so much of its government budget depends on petroleum sales. But the country’s marginal cost of producing a barrel is so low, the Iranian government can absorb the discounts.