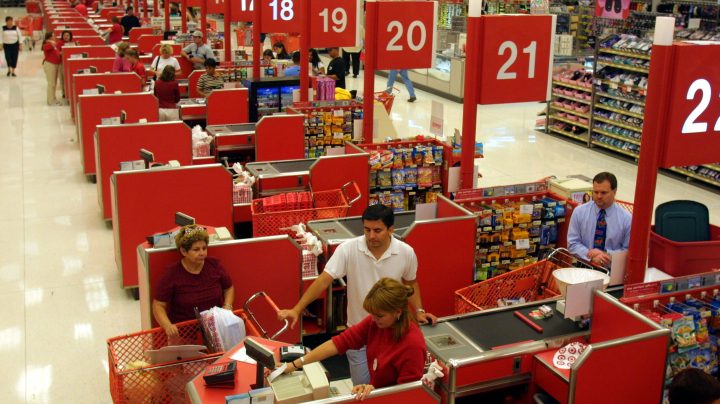 COPY
Consumer purchases make up a large part of the economy. But right now, people aren't spending as much as they used to. Above, Target shoppers in 2001. Joe Raedle/Getty Images
COVID-19

Consumer purchases make up a large part of the economy. But right now, people aren't spending as much as they used to. Above, Target shoppers in 2001. Joe Raedle/Getty Images
Listen Now

Earlier this month, in a discussion about the coronavirus and the economy, Federal Reserve Chair Jerome Powell said he is expecting a weak second quarter, marked by “very low economic output and big increases in initial claims for unemployment.”

With more than 22 million people having filed initial unemployment claims, we can already see the “big increases” Powell referred to. What we don’t have data on right now is how this crisis is affecting gross domestic product, the total value of goods and services made in this country.

We called up a few economists to ask how they are calculating GDP when so much of the economy has stopped and to hear their predictions of how this economic crisis will affect GDP for the second quarter, which started in April and lasts through June.

“We think you’re looking at an annualized contraction somewhere between 20 and 25%,” said Jay Bryson, acting chief economist at Wells Fargo. For reference, GDP grew by 2% in the second quarter of 2019.

Bryson’s prediction is based on the fact that people aren’t spending money as usual. To make his calculation, Bryson made educated guesses on what consumer spending will look like in different industries.

“Just look at people going through [Transportation Security Administration] lines. That’s down 95%,” he said. Consequently, he expects air travel to be down 80% to 90% this quarter and predicts similar drops in the restaurant and hotel industries.

Bryson and his colleagues at Wells Fargo forecast GDP regularly, but he said this calculation was different than usual.

“Frankly, there’s a lot more art than science right now,” Bryson said. “We have not seen anything like this. There’s no playbook that we can go back on and dust off and say, ‘Oh, this is what it looks like when the economy completely shuts down.'”

Campbell Harvey, a professor of finance at Duke University, took a different approach to calculating his GDP estimate for the second quarter, focusing on income loss instead of spending changes.

“I would not be surprised to see minus 25%,” Harvey said.

Next week, we’ll get an estimate of what happened to GDP in the first quarter, which includes the very beginning of this crisis. An estimate for GDP in the second quarter will be released at the end of July.

Betsey Stevenson, professor of economics and public policy at the University of Michigan, is looking even further down the line.

“We saw in the 2008 downturn that it took a number of years before we actually knew how bad our worst quarter in that recession was,” Stevenson said. “It’s quite possible that we don’t know truly how big the decline in GDP is this year, last quarter or this quarter, for five years.”