Another 5.2 million Americans have filed unemployment claims, the third largest number on record.

More than 6.6 million Americans filed claims for the week ending April 4, which the Labor Department revised up by 9,000 from the figure it initially released. Over the past month, about 22 million Americans have filed jobless claims.

Earlier this week, the International Monetary Fund said we’re on the brink of the worst economic downturn since the Great Depression.

The state with the highest number of unemployment claims last week was California, which has consistently topped the list. However, the number of claims in the state since the week of April 4 decreased, with the Labor Department noting that there were “fewer layoffs in the construction and manufacturing industries.”

States are the ones who are paying out these benefits and they’re strained, reported Marketplace’s Meghan McCarty Carino.

Jared Walczak, a researcher with the Tax Foundation, said federal figures indicate some of the hardest hit states, like California, New York and Texas, could be running low on funds in a matter of weeks.

Colorado had the highest percent increase, with its unemployment claims rising more than 126%. Last week, the state had more than 105,000 residents file for unemployment benefits.

In an address on April 6, Governor Jared Polis extended the state’s stay-at-home order until at least April 26. 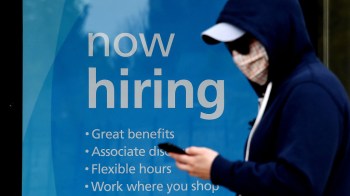