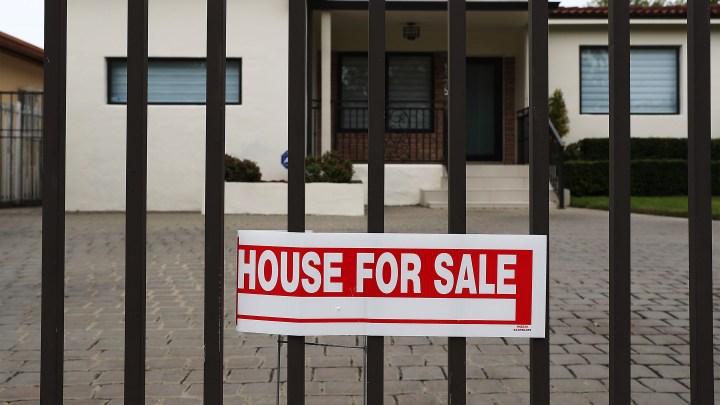 COPY
Borrowers are finding it harder to qualify for a mortgage. Joe Raedle/Getty Images
COVID-19

Borrowers are finding it harder to qualify for a mortgage. Joe Raedle/Getty Images
Listen Now

Millie Ruiz-Wagner is a mortgage lender in the Chicago area. Just weeks ago, a 580 credit score, out of a maximum 850, was good enough to qualify for a mortgage. These days she’s not seeing many loans approved under 640.

“I got caught with people who were preapproved with credit scores under 640, and I had to stop, regroup, help them fix their credit so they can get back in the buying market,” she said.

People do still want to buy homes, and even more people want to refinance existing mortgages, to take advantage of near-record-low interest rates. As of last week, the average interest rate on a 30-year mortgage was 3.31%, according to Freddie Mac.

But Joel Kan, an economic forecaster at the Mortgage Bankers Association, said that’s getting harder to do. The group’s Mortgage Credit Availability Index fell last month to its lowest level in five years, and it’s likely to get worse.

“The March numbers were really only a reflection of tightening in the last two weeks of the month,” Kan said. “With the gloomier economic outlook and a full month’s worth of data in April, I think we can expect more conservative lending and thus a decline in credit supply.”

For potential borrowers, he said, “You’re less able to secure a mortgage, and if you are, you’re going to pay a much higher mortgage rate.” That could especially hurt minority and younger borrowers “because they typically have lower credit scores.”

It’s not just credit scores getting a closer look, said Lana Jern, a broker at Uptown Mortgage in Denver. Lenders are rejecting certain sources of income and asking for additional documentation, she said. One lender recently required a client to prove that his tenants had paid their rent in March and April, something Jern had never seen.

“It’s their prerogative, of course, but some of it I think is a little overreactive,” she said. “Then again, it’s not my money.”

Tighter credit standards are likely to further slow home sales, already under strain from stay-at-home orders and mounting job losses. Maryland-based builder Jeff Caruso, owner of Caruso Homes, said some of his clients have run into trouble getting financing.

“I would say 8 to 10 percent now are looking at credit issues, trying to increase their credit scores because of these new requirements,” he said. “That’s definitely affecting our homes under construction and our new home sales.”