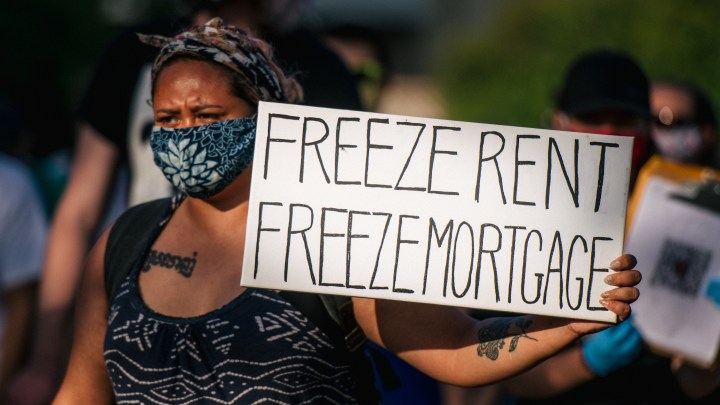 COPY
Most analysts don't expect home prices to reverse in the near term, but if mortgage rates were to substantially increase, the pace of appreciation could slow. Brandon Bell/Getty Images

Most analysts don't expect home prices to reverse in the near term, but if mortgage rates were to substantially increase, the pace of appreciation could slow. Brandon Bell/Getty Images
Listen Now

Mortgages got a little bit more expensive this week — with the emphasis on “little.” Freddie Mac said Thursday that the average interest on a 30-year fixed-rate mortgage is back up to 3%, with fees of 0.6%. That is still incredibly low by historical standards. Those low rates are in turn tempting homebuyers to borrow more money to pay those rising home prices.

The average size of a purchase loan rose to $411,400 last week, according to the Mortgage Bankers Association, the highest since February. The average loan for a new home surpassed $377,000 last month, a record high.

The MBA’s head of forecasting, Joel Kan, said the increase is partly due to the kinds of homes people are buying. The pandemic led many newly remote workers to seek bigger houses in the suburbs, with more outdoor space.

“These homeowners, typically, are still gainfully employed, might be higher-income, etc.,” Kan said. “They might be able to afford a little bit more.”

And lenders are making it easier for them to borrow. The MBA’s Mortgage Credit Availability Index increased almost 5% last month for conventional loans and 7% for jumbo loans.

“That’s really a function of the fact that our economy is improving, the labor market is improving, and so lenders are feeling a little bit more confident,” said Odeta Kushi, deputy chief economist at First American, a title insurance company.

Borrowers still need pretty pristine credit to qualify for a mortgage, she said. The median credit score for new mortgages was 788 in the first quarter of this year, according to the Federal Reserve Bank of New York, up from 773 during the same period last year.

“For those that have just recently gotten a mortgage, they’ve had less time to benefit from house-price appreciation, increasing the likelihood that they’d be underwater,” Neal said.

Most analysts aren’t expecting prices to fall anytime soon, though a significant increase in mortgage rates could slow price growth.

“It’s going to take years before we can add enough supply to the market to result in a balanced market,” Kushi said. “We expect house prices to continue to remain positive.”