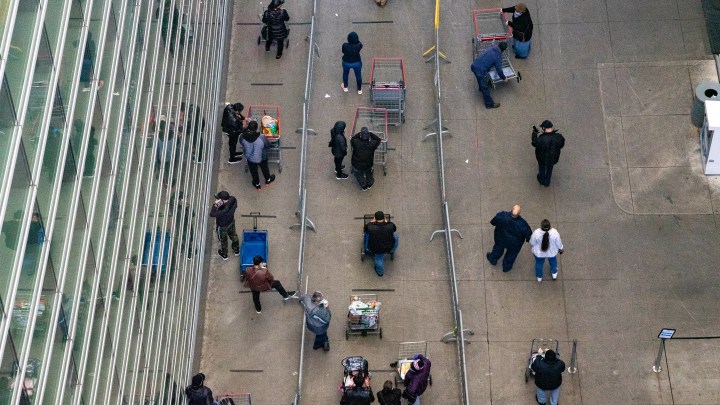 COPY
Eric Rosengren thinks it will be "some time" before people are comfortable attending social events in the same way. "And that means it's going to be some time before the economy is fully recovered." David Dee Delgado/Getty Images
COVID-19

Eric Rosengren thinks it will be "some time" before people are comfortable attending social events in the same way. "And that means it's going to be some time before the economy is fully recovered." David Dee Delgado/Getty Images
Listen Now

While the COVID-19 pandemic continues to put pressure on the entire financial system, economists grapple with trying to prevent economic collapse, while simultaneously putting tools in place for recovery, in case that collapse comes to fruition.

“Marketplace Morning Report” host David Brancaccio spoke to President of the Federal Reserve Bank of Boston Eric Rosengren, who said that recovery may be a ways away and depends on when we get a vaccine.

David Brancaccio: We had this downward plummet. What about the other side of this? Some people are expecting a V-shape, where once we figure out the testing and once we get people back to work, it’ll shoot back upward. Are you in that camp?

Eric Rosengren: Well, one of the challenges is estimating where the economy is going to be, you also need to estimate what the infection rate is going to be across the economy. And I think that’s still quite uncertain. If we are successful with the social distancing and bringing down the infection rate very significantly, and can do testing, then it’s more likely the economy comes back quickly. But there are a lot of stresses that are occurring by having a shutdown that’s already lasted for roughly a month in some places, and it’s likely to extend for another couple of months in many places. While I certainly would hope for the V-type of recovery, I unfortunately think it’s probably going to be a little bit slower than that.

Brancaccio: I guess another way to think about it is, are we going to end up with a sustained downturn that might resemble the last Great Recession that followed the mortgage crisis? Is it still too early to have a sense of that?

Brancaccio: There’s so much to worry about. I hadn’t worried about the following until I read some of your recent comments. You think the pandemic might hit home prices and perhaps the price of commercial real estate?

Rosengren: Well, I think there are going to be a lot of challenges. People that have recently been laid off are not going to be in a position to buy homes or cars. Many firms are going to try to reopen, but not all firms are going to be successful. I think it depends a lot on what part of the real estate business you’re in. So if your real estate is warehousing, the online shopping is still very strong. If the real estate is focused on the retail side, that was already facing significant challenges. Many retailers are not paying their rent right now. And so it may be some time before they’re able to open, and once they do open it becomes critically important that there’s enough foot traffic. So it’s not just opening your store, but how many stores around you open at the same time. I think there are going to be sectors of the real estate market that are affected, including home sales. I think many individuals are going to find that a lot of the savings they thought were for a down payment for a house will [now] go into making sure that they’re covered over the next couple of months while they’re waiting for the economy to get back up and running.

“While I certainly would hope for the V-type of recovery, I unfortunately think it’s probably going to be a little bit slower than that.”

Eric Rosengren, President of the Federal Reserve of Boston

Brancaccio: State, cities, towns, counties — if they’re going to keep the public sector people on their payrolls, these governments are probably going to need some help, right?

Rosengren: I think that’s definitely right. That’s one of the areas that there probably hasn’t been enough attention, is state and municipal government. Both of those areas are stressed by this, just like private sector is, and coming out of the last recession, one of the areas that was very slow to get back up to speed was state and local government. The reason is because they have to have a balanced budget. And so they’re making a lot of expenditures now. And if we don’t get some fiscal transfers, it’s going to be very difficult for state and local governments not to be doing budget cuts at the very time we’re trying to get the economy to recover.

Brancaccio: This is a public health crisis. Obviously, it’s an economic crisis, but we don’t say, at least yet, that it’s a crisis of the financial system. How would you say markets are holding up, with the Fed’s help, of course?

Rosengren: I think we’ve made some progress on avoiding serious financial spillovers. Obviously, the stock market is still much lower than it was prior to COVID-19 becoming a real problem. But I do think that there are still financial markets that are stressed. We’re taking out liquidity premium. I think the big question is, over time, do some of the firms become more of a credit risk? And that really is determined primarily by how the public health and the pandemic work out, rather than the spillovers. But I think the Fed has been reasonably successful in opening some of the key markets. And the longer the maturity or the greater the credit risk, the less likely there are very many trades at this time.

Brancaccio: There are a lot of companies that are quite extended and have a lot of debt. And if perceptions change about risk there, you could have further stresses on the financial system.

Rosengren: That’s exactly right. One of the challenges going into this period was that the corporate sector in the United States was already heavily indebted. And a firm that’s highly leveraged has less capacity to be resilient when a shock like this occurs. That frequently means layoffs, and it may mean more firm closures than we would have seen if we didn’t have as much leverage in the economy.

Brancaccio: So that’s keeping a view on a riskier sector, but one of the supposedly safest are money markets, and your bank was at the center of efforts to stabilize money markets when they wobbled a bit in the face of this crisis. How’s that process going?

Rosengren: That process is going very well. So there are different kinds of money market funds. One is a government money market fund, and they’ve not had any problems during the entire time. In fact, they’ve had inflows. The prime money market funds, and the money market funds focused on municipal securities have been a little bit more challenged, previously, with the opening of our facility and some of the other announcements by the Federal Reserve. We’ve seen the flow into our facilities going down. We’ve seen the spreads for many of the kinds of instruments that these money market funds buy have gotten quite narrow. So I think we’ve had a great deal of success in restoring buyers and sellers to that market. So I think that initial problem, that looked like a liquidity risk could result in some money funds having trouble meeting all the outflow of funds, that no longer is a problem. So I think that’s one of the examples where our facilities have been quite successful in making sure that there weren’t financial spillovers.