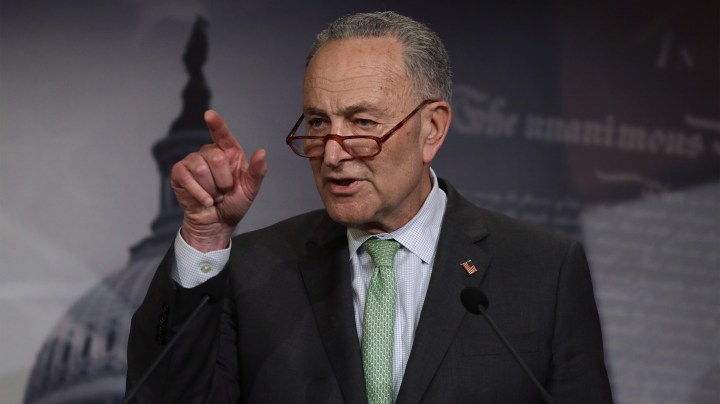 As Congress continues to hammer out the details of a proposed trillion-dollar stimulus package, one question is what kind of strings to attach to any corporate bailout money.

Democrats — along with consumer and labor advocates — are pushing for a ban on share buybacks as a condition of any financial assistance. And though many Republicans are opposed, President Donald Trump says he’s “OK” with such a condition.

Companies spent billions of dollars after the 2017 tax cuts doing exactly that — buying back their own stock at the expense of spending on research and development or paying higher wages.

On the Senate floor earlier this week, minority leader Chuck Schumer of New York summed up the backlash.

“One of the reasons, let’s not forget, that many airlines are so short of cash right now is they spent billions on stock buybacks — money they had to send out when they should have been saving it for a rainy day,” Schumer said.

In the last decade, according to Bloomberg, the big U.S. airlines spent more than 95% of their free cash flow buying back their own shares. Companies do this to boost their stock price and reward shareholders and executives, who get paid more when shares are worth more.

“In most industries, a majority of companies are spending more than 50% of their profits on buybacks,” said Irene Tung, senior researcher at the National Employment Law Project. “That’s sort of a central weakness of the U.S. economy right now as we go into this economic downturn.”

Not just because companies don’t have enough rainy day funds, but because their workers don’t.

“If companies had been paying workers more, then people wouldn’t be living paycheck to paycheck the way that they are now, leaving them as vulnerable as they are, when all of a sudden that paycheck disappears,” she said.

“The money goes out to investors who by and large are reinvesting this in other companies,” said Ric Marshall, who researches corporate governance at MSCI. “This is all money that’s returning back into the larger economy.”

Charles Elson, professor of finance at the University of Delaware, said the blame on buybacks is misplaced.

“Even had you not bought any stock back, you would never have had enough cash on hand to support the kinds of revenue declines that we’re seeing,” Elson said. “You’re talking 60%, 70% decline in revenue. That’s catastrophic.”

And he said unlike the bank bailouts during the financial crisis, this particular catastrophe wasn’t the companies’ fault.