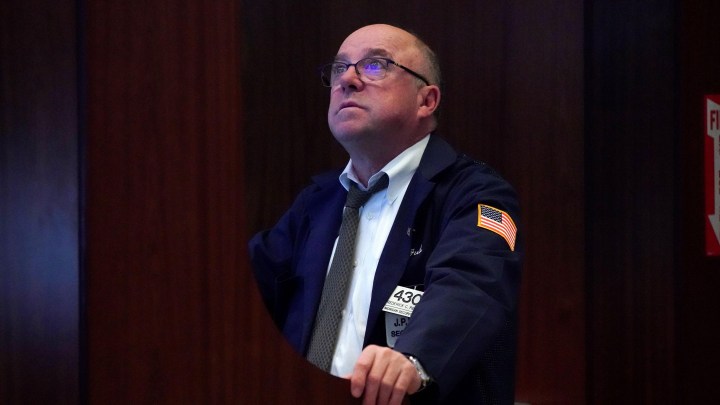 COPY
Markets in Europe and futures in the U.S. are up Friday morning after a mess Thursday. Bryan R. Smith/AFP via Getty Images
COVID-19

Markets in Europe and futures in the U.S. are up Friday morning after a mess Thursday. Bryan R. Smith/AFP via Getty Images
Listen Now

Financial markets around the world have been battered this week amid concerns about how the spread of COVID-19 will impact the global economy and how long disruptions to supply chains and travel might last.

Many stock benchmarks, including those in the U.S., have officially entered bear market territory after shedding at least 20% from recent highs. Now’s the time when commentators start remarking on segments of the financial market that have gone mostly unnoticed since the end of the 2008 financial crisis. One of those? The credit market, where companies can borrow money from investors by selling bonds.

Mohamed El-Erian, chief economic adviser at Allianz, explained how this usually steady part of the market is starting to show signs of stress to Marketplace’s Victoria Craig. The following is an edited transcript of their conversation.

Mohamed El-Erian: The credit market connects companies looking for funding with investors able and willing to lend them money at some risk, but to get paid more money.

Victoria Craig: Investors have been worried about how the coronavirus outbreak is going to impact the global economy. Now we’re starting to see investors having difficulty finding buyers for these bonds that they want to sell. What does that mean?

El-Erian: It’s the equivalent of all of us trying to exit through a very small door. So you have a bunch of people looking to sell. On the other side, very few people are willing to buy. And then, the excitement starts, because if you are managing someone else’s money and they want that cash, if you’re not able to sell what you want to sell, you’ll sell what you can sell.

Craig: And what happens after that? Does this mean that we might start seeing companies declare bankruptcy and go bust because they don’t have access to cash?

El-Erian: So on the investment grade side, the big signal was given earlier this week when Boeing drew down fully its $12 billion credit line. So people immediately said, ‘Wow, if Boeing is doing that, what about the others?’ On the other side, the most vulnerable right now are small energy companies because they are dealing with a massive decline in oil prices and they tend to be very highly indebted. So keep an eye on those companies and then you’re going to keep an eye on smaller airlines and small cruise lines. The ones that are getting hit very hard on the revenue side. Some of them — some of them — have maturing debt and they’re going to face a really rough time.

Craig: How worried should average investors be?

El-Erian: The good news is that the banking system and the payments and settlement system, they are rock solid right now in the United States. So the problem is not the banks. However, the risk doesn’t disappear. It moves and migrates. And over the last few years, it has migrated to what’s called the non-banks, what other people call the ‘shadow banking’ system. It is a sector that engages in borrowing and lending, but it’s not banks. It is not as vital to the economy as the banks are. So this is not a massive heart attack, like 2008 was, of the financial system, but it is a big hit to the economy; it will make the economic problems worse. And if it tips, companies that are fine from a solvency issue but need liquidity, then this liquidity problem becomes a solvency problem. So we’ve got to keep an eye on that. But it’s not the banks. It’s really important to stress. It’s not the banks. It’s not the payments and settlement system.

Craig: It’s not the systemically important institutions, in other words.