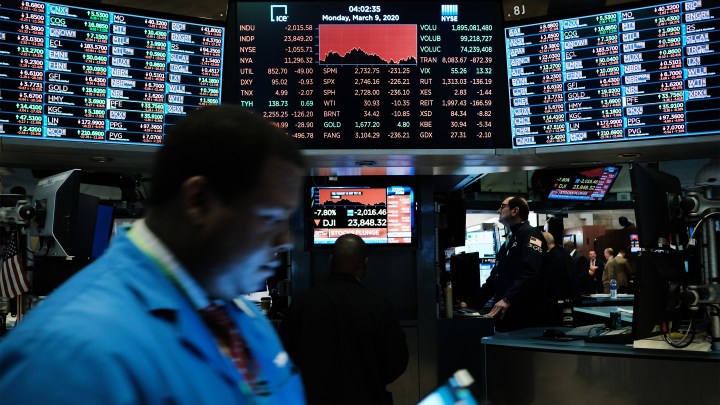 The bond market can give us a good sense of where the economy is going. In a crisis like this one, it’s clear investors want safety — and there isn’t anything safer than American government Treasury bonds.

So investors are buying bonds, which is driving bond yields lower.

The yield on the 10-year Treasury note closed Monday under 0.6%. That’s lower than during the financial crisis, when people really wanted safety.

But Guy LeBas, chief fixed income strategist at Janney Montgomery Scott, said it’s the magnitude of the change that matters.

There’s another big difference in the bond market today. Marco Rossi, assistant professor of finance at Texas A&M University, said the Fed’s response to the financial crisis — buying up long-term bonds to push down interest rates — has led investors to expect rates to stay low. Monday’s yields reflect those expectations.

“Back in 2008, that approach to monetary policy had not yet been tried, and now we are in this new environment and we know that the Fed can do that and will likely intensify that,” Rossi said.

A third factor at play is a little more complicated. Josh Younger, a managing director at JPMorgan Chase, said when interest rates fall quickly, a lot of homeowners refinance their mortgages to take advantage of lower rates.

That means banks and other investors that were betting on getting interest payments for decades are getting paid much more quickly than they expected.

So Younger said they need other long-term investments.

“So what’s an asset that I can add that has duration and low credit risk in a very uncertain environment? That’s Treasurys,” Younger said.

If that sounds like a vicious cycle, it is. Because, of course, the more demand for Treasurys, the lower the yields get and the more people want to refinance.