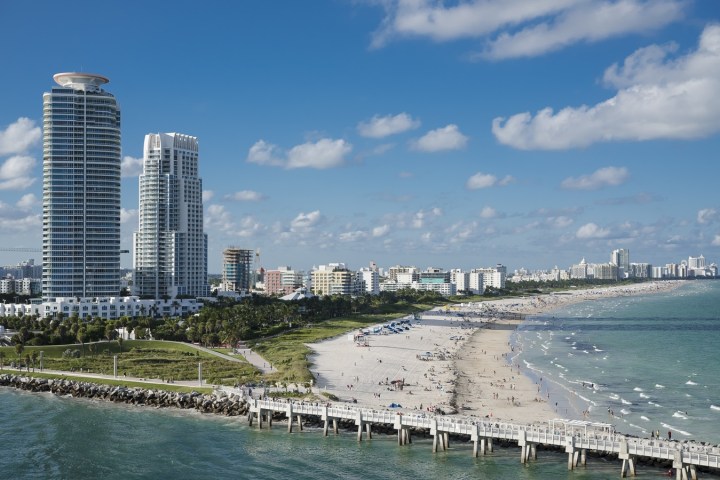 COPY
Florida is among a number of states that have cut back on unemployment assistance. Above, Miami Beach. Pxhere

Florida is among a number of states that have cut back on unemployment assistance. Above, Miami Beach. Pxhere
Listen Now

The national unemployment rate is near a 50-year low now, at 3.6%. But even in such a good labor market, there are always people getting laid off and hoping to get unemployment insurance to tide them over while they look for another job.

In state-run unemployment insurance, employers pay into a state trust fund through a payroll tax. Workers who have lost their job for a qualifying reason (for instance, the economy has slowed down, the employer has downsized or discontinued a line of business), collect a portion of their previous pay while they search for new work. The standard duration of state benefits is 26 weeks.

But states provide varying degrees of financial support for laid-off workers, and some provide less than others.

Florida is among a number of states that have cut back on unemployment assistance, paying lower benefits, for less time, to a smaller fraction of laid-off workers than a decade ago. Other states that have followed a similar path include North Carolina, Michigan, Missouri, South Carolina, Georgia, Kansas, Arkansas and Idaho.

Today, Scop works for a large nonprofit agency that helps at-risk families in Miami. In 2009, she had just returned to work after recovering from a severe illness that left her disabled and unable to work for years.

“My first job ended with a layoff after six months from a nonprofit that had a federal contract,” she said. “I had four hours’ notice.”

The Great Recession was raging; unemployment in Florida would soon top 11%. And initially, Scop didn’t qualify for unemployment benefits. She hadn’t worked long enough. Meanwhile, she lost her apartment.

“It’s very stressful, very taxing physically, when you’re moving from place to place and living on the edge.”

Eventually, a public interest lawyer helped Scop qualify for unemployment benefits. She got $600 per month for six months of state benefits, then received extended federal benefits.

By 2014, Scop had landed a job she loved at a large university hospital. But the next year, her department was closed and she was laid off again.

In the interim, in 2011, Florida had passed sweeping unemployment insurance reforms.

This time, Scop received $470 per month and her unemployment benefits ran out after just a few months.

“You are reliant on that money for doing things to find another job, and I did, but I also needed those funds to meet very basic needs,” she said.

“Florida has a long history of making it more difficult for particularly low-wage workers to get benefits,” said employment attorney Arthur Rosenberg, who fought against the state’s unemployment cutbacks as a staff attorney for Florida Legal Services before retiring several years ago.

During the Great Recession, Florida was inundated with unemployment claims, and like many states, it exhausted its unemployment trust fund and had to borrow from the federal government to pay benefits.

As the economy began to recover in the early 2010s, the Florida legislature cut unemployment benefits and tightened eligibility, in part to return the trust fund to solvency.

“Objectively, that seems fair,” Rosenberg said. “We’re in the computer age. But when you’re talking about a lot of people that have difficulty with English, low-wage workers that need help, that’s going to keep a lot of people off the rolls.”

Florida is among a handful of states that have cut how long people can receive benefits — from 26 weeks, which prevailed nationwide through the Great Recession, to a current maximum of 12 weeks when unemployment in the state is 4.5% or below.

Orlando commercial real estate appraiser Walter Carpenter thinks that’s exactly how the system should work when the economy is strong and unemployment is low. Carpenter runs a company with 20 employees and chairs the National Federation of Independent Business in Florida.

“If you’re in full employment, there’s a lot of job opportunities. You don’t need to be paying benefits for as long a period of time.”

The taxes that Florida employers pay to fund unemployment benefits are now the lowest allowed under federal law. And Florida’s program has been renamed Reemployment Assistance, emphasizing the goal of  getting people off benefits and back in a job quickly.

“That’s where I think that Florida’s been very innovative,” Carpenter said. “The concentration is on reemployment or training sessions for people.”

Even with state unemployment at 3%, though, it often takes people longer than 12 weeks to find a new job that fits their skills and experience. Wentworth said that Florida now has one of the highest rates in the nation of unemployed people who exhaust their benefits before finding work again.

Why people are dropping unemployment benefits before they run out