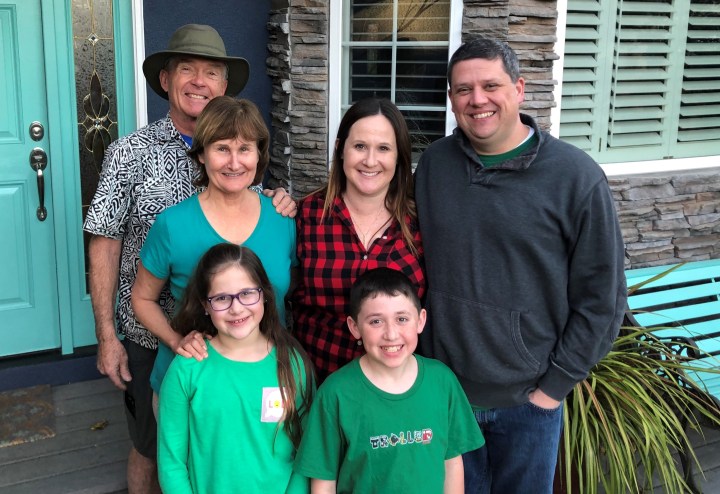 COPY
Mike and Silvia Kersh, Jill, Sam, Lucy, and Jack Weaver at their home in Pleasanton, California. Courtesy of the Weavers
Adventures in Housing

Mike and Silvia Kersh, Jill, Sam, Lucy, and Jack Weaver at their home in Pleasanton, California. Courtesy of the Weavers
Listen Now

Welcome to our series, “Adventures in Housing.” Because more and more, that’s what finding and affording a place to live has become. These will be your stories. Share yours using the submissions box below. Today, we hear the story of one household and how it grew.

“I think he was first attracted to my really awesome purple sweatpants,” Jill Weaver told “Marketplace.”

“We became inseparable, and then fell in love and got married,” said Sam Weaver.

The couple bought a condo together in 2007. “We had been married for about three years and were looking to buy a starter home — something that we could have a kid or two in, and then move on.”

“Then the housing market collapsed and we were quickly underwater on our mortgage,” said Sam. “We had to figure out our next steps, ended up short-selling the condo and entering the rental market.”

That is until Jill’s parents, Mike and Silvia Kersh, came to them with a plan.

“We were at the point where we were starting to think about retirement,” said Mike Kersh. “But we also knew that we were very attached to our house.”

Mike and Silvia purchased their house in 1983. They planned to travel during their golden years and worried about leaving their home and garden unattended for weeks at a time.

“At first we joked, wouldn’t it be nice if one of the kids lived on the next block or down the street?” said Silvia Kersh. “Then we thought, well, this house is really bigger than we need. Maybe one of the kids would take it over and we could travel freely and have the best of both worlds.”

They proposed adding a second story to live in, allowing Jill, Sam and their children to take the rest of the house.

“At first we were like, “Oh, boy, living with my parents, yay,”” said Jill, “but it actually has been the biggest blessing.”

All now say they live together happily. Mike and Silvia know their house is in good hands when they travel, while Jill and Sam have an extra set of adults to help with childcare.

“There’s definitely that stigma of ‘hey, you’re living with your parents,’ but it is a true blessing,” said Sam. “There is no singular path to success or even home ownership in this country. You need to do what works for you.”