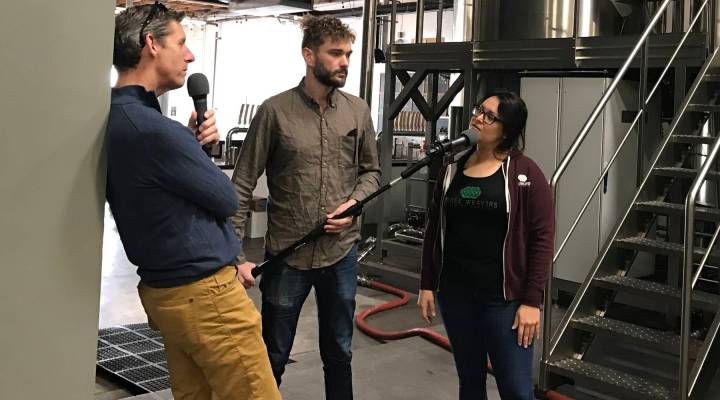 Three Weavers in Inglewood, California, is one of those places where you can sit and sip a beer with a straight-shot view of the fermentation tanks.

It’s a craft brewery, for sure, or independent brewery as brewmaster Alexandra Nowell would prefer it called. Whatever you call them, smaller breweries are becoming more and more common in Los Angeles. But what’s less common is to find one run by two women.

“Our growth has been going much faster than we anticipated,” says Lynne Weaver, founder of Three Weavers Brewing.

“We’re still the vast minority of the crowd in the room, but it grows all the time,” she said.

Three Weavers gets its name from women, too. The “Three Weavers” refers to founder Lynne Weaver’s three daughters. And Weaver said the beer business is booming in Los Angeles.

“Our growth has been going much faster than we anticipated, so I’m having to adapt [projections] on a quarterly basis,” Weaver said.

The brewery has “become very much of a family, and I think that Lynne and I feel responsible for what’s going on in our employees lives,” says Nowell, above in Three Weaver’s taproom.

But that doesn’t mean Weaver and Nowell are ready to sell to the highest bidder and leave running the business to someone else.

“We’re not on that path. It’s become very much of a family, and I think that Lynne and I feel responsible for what’s going on in our employees’ lives,” Nowell said.