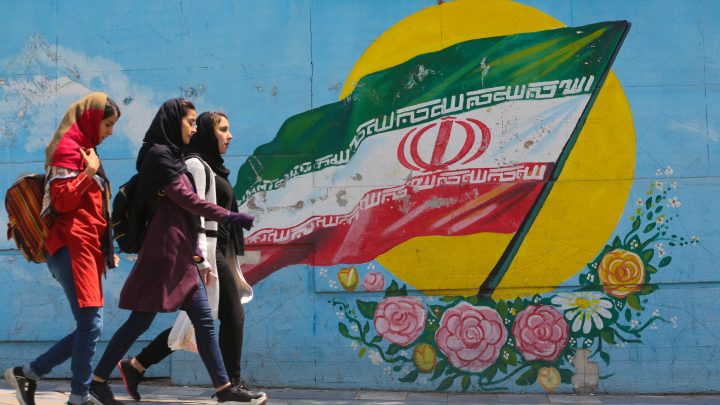 COPY
Young girls in Tehran walk in front of a mural showing the Iranian flag in April. Atta Kenare/AFP via Getty Images

Young girls in Tehran walk in front of a mural showing the Iranian flag in April. Atta Kenare/AFP via Getty Images
Listen Now

The tension between the United States and Iran escalated last week when U.S. forces killed Iran’s Gen. Qassem Soleimani, the latest action in a the long-standing hostility between the two countries. For four decades, Iran has battled sanctions, largely imposed by the United States, in response to its nuclear program and alleged human rights abuses. The sanctions have halted economic growth and international development, causing hardship for Iranian citizens.

Hossein Askari is the emeritus Iran professor of international business and affairs at George Washington University. He spoke with “Marketplace” host Kai Ryssdal about what Iran’s economy looks like after 40 years of sanctions. The following in a edited transcript of their conversation.

Kai Ryssdal: By way of background refresher, I think it’s probably worth pointing out here that sanctions have been imposed on Iran by virtually every president since Jimmy Carter, right?

Hossein Askari: That is correct.

Ryssdal: OK. Now, do they work? Have we gotten what we want out of those sanctions?

Askari: Well, there were times that we kind of got what we wanted. But really, sanctions do not work immediately. They take time because you’re trying to cause enough pain on the country to change its policies. And we kind of got there in 2015 when we signed an agreement with them, but that’s about it.

Ryssdal: Right. That is the nuclear deal, of course, that President Donald Trump has pulled us out of. Let me ask you then, the pain that’s being inflicted, what does that look like in the Iranian economy today?

Askari: Well, the things that you notice is that in Iran, of course, there’s been very little external foreign investment. Economic growth has been quite bad in Iran, largely because the sanctions but also because of terrible economic policies, but also because of the Iran-Iraq War, which devastated the country in between 1980 and 1988. So you have had slow economic growth, the price of imports have gone up, and they have not been able to get the things that they want, and the quality of life has really gone down.

Ryssdal: You were born there, right?

Ryssdal: I imagine, though, you still have friends, possibly family, there. When you talk to them, what’s it like?

Askari: Well, they are experiencing hardship. I mean, I remember vividly the case of a person who was willing to go to jail. He in fact went and robbed the grocery store of a bottle of milk and went to jail because he needed milk for his children. And so things are bad. And I think that they used to blame a lot of this on the regime. But I think that in the last few weeks, especially over the last weekend, a lot of the blame is being put on the United States.

Ryssdal: It’s worth a mention here, just on the way out, that it’s not just the United States that has sanctions on Iran right now. There are European Union sanctions, also United Nations sanctions.

Askari: Yes, but I think the kinds of sanctions that the United States has, which are basically financial sanctions, and what they do is they tell every country, “If your institutions, your banks, have business dealings with Iran, then you will not have access to the U.S. market.” And so the companies are afraid that if they do anything with Iran, then the United States will sanction them.

Ryssdal: Talk to me for a second about oil, would you, because that, of course, is their primary source of foreign reserves, and they’re exporting almost nothing now, right?

Askari: That is exactly correct. Iran’s exports, I would say by far the most important is oil. Then there’s natural gas and petrochemicals. And basically, all of Iran’s exports have gone down to almost zero And the only outlets for Iran’s export is basically to Iraq and to Syria.

Ryssdal: OK, so crystal ball this for me: If somehow there is a climb down from the current tensions and some mutual agreements are reached about the future course of events, how long does it take the Iranian economy to get back to something near normal?

Askari: Well, I think it all depends what you mean by near normal. I think near normal, for me, it’s a country that is run well, with decent policies, a lot of interaction with the rest of the world. I think that will probably take two or three years. But for Iranians to feel the beneficial effects, I would say within six months.