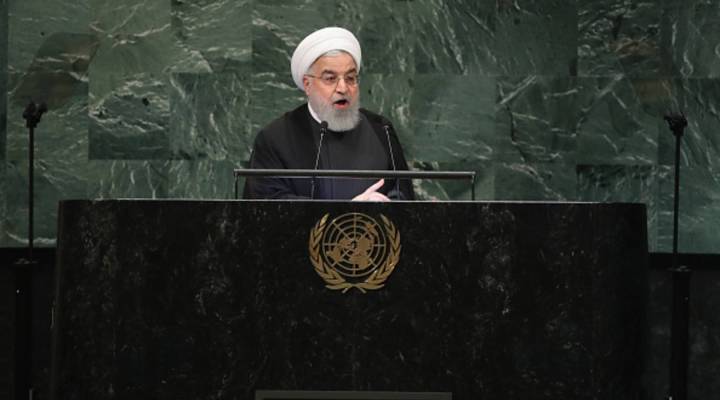 Iranian President Hassan Rouhani accused the United States on Tuesday of trying to overthrow his government, rejecting bilateral talks after President Donald Trump predicted stepped-up U.S. sanctions would get Tehran to negotiate over its nuclear program.

Addressing world leaders at the U.N. General Assembly, Rouhani accused the Trump administration of violating “state obligations” from the Obama administration by withdrawing from the 2015 nuclear deal that Iran signed with the United States and five other major powers.

“On what basis and criteria can we enter into an agreement with an administration misbehaving such as this?” Rouhani asked. “It is ironic that the U.S. government does not even conceal its plan for overthrowing the same government it invites to talks.”

Rouhani invited the United States to come back to negotiations within the U.N. Security Council, which endorsed the nuclear deal. There, he said, both sides can listen to each other.

“Beginning the dialogue starts with ending threats and unjust sanctions that negate the principles of ethics and international law,” he said.

In remarks released while Rouhani was still talking, National Security Adviser John Bolton doubled down on the decision to withdraw from the deal, echoing his president’s strong language and using blunt language to dismiss any entreaties from Tehran. He called the scrapped Iran deal “the worst diplomatic debacle in American history.”

“According to the mullahs in Tehran, we are ‘the Great Satan,’ lord of the underworld, master of the raging inferno,” Bolton said in remarks prepared for delivery at a New York meeting convened to oppose Iran’s nuclear ambitions.

“So, I might imagine they would take me seriously when I assure them today: If you cross us, our allies, or our partners; if you harm our citizens; if you continue to lie, cheat and deceive, yes, there will indeed be HELL to PAY,” Bolton said.

The capitalizations were included in the text of the quotes released to journalists.

Rouhani, in his General Assembly speech, targeted Trump in language if not directly in name. He condemned “recklessness and disregard of some states for international values and institutions.”

Rouhani laid into leaders who believe they can “ride public sentiments and gain popular support through the fomenting of extremist nationalism and racism” and through what he called “xenophobic tendencies resembling a Nazi disposition.”

Trump, in his own speech, said Americans “reject the ideology of globalism” in favor of what he called “the doctrine of patriotism.” He also blasted what he called Iran’s “corrupt dictatorship.”

Rouhani also said U.S. sanctions against his country amount to an “economic war” that’s disrupting trade and will harm people beyond Iran.

Trump’s administration has reinstated sanctions on Iran after pulling Washington out of the multinational 2015 nuclear deal with Tehran. Trump says the deal was a “horrible” agreement that didn’t do enough to contain Iranian “aggression.”

In remarks earlier Tuesday, Trump predicted that the pressure from renewed sanctions would force Iran back to the table to negotiate.

But Rouhani noted that Iranians have endured sanctions before and “can overcome this difficult phase as well.”