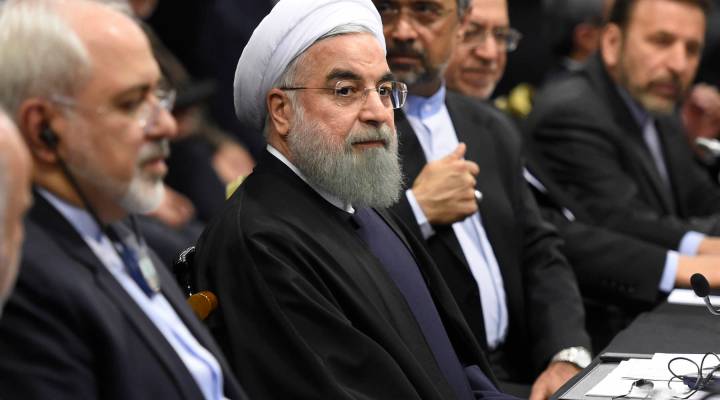 COPY
Iranian President Hassan Rouhani attends a meeting with French ministers and representatives of the Movement of the Enterprises of France in Paris on January 27, 2016. ERIC FEFERBERG/AFP/Getty Images

Iranian President Hassan Rouhani attends a meeting with French ministers and representatives of the Movement of the Enterprises of France in Paris on January 27, 2016. ERIC FEFERBERG/AFP/Getty Images
Listen Now

As Iran slowly works its way back into the global economy, the country’s president, Hassan Rouhani, is in Europe looking to drum up excitement about investment. Some of the sanctions imposed on Iran because of its nuclear program have been lifted, which means international businesses, ones not headquartered in the United States, are free to trade with, and invest in, Iran. Many U.S. businesses want to get a slice of the pie, too, but they’re not really competing on an level playing field.

Majid Rafizadeh, a Middle East scholar at Harvard, said American restrictions have opened the door for European and Asian businesses to take hold of the Iranian market.

Many European countries have gone further in relaxing sanctions so it’s easier for E.U. businesses to dive in. American companies can only use their foreign subsidiaries to do business in Iran and even then they need a waiver from the Treasury Department. Rafizadeh said Iranians are hungry for American products.

“If American companies, like Microsoft or Apple, were allowed to operate in Iran,” he said, “they would have really better edge over European companies.”

An edge particularly with young Iranians. Sixty percent of the country’s population is under the age of 30.  They’re also well-educated and have a lot of spending power. But Suzanne Maloney, a former State Department official who’s now an Iran expert at the Brookings Institution, said American companies are still likely to tread lightly.

“I think that any American organization that has an interest in Iran is going to proceed very, very slowly,” she said.

Maloney said, in part, that’s because the Justice Department comes down hard on those who break sanctions.

“As I was always reminded when I was in the private sector, it can have direct personal consequences,” she said. “Individuals go to prison, and individuals can sustain fairly hefty fines.”

Individuals could pay millions of dollars. Businesses could be forced to pay much more. In 2014, the French bank BNP Paribas had to shell out almost $9 billion to US authorities for helping clients get around sanctions.