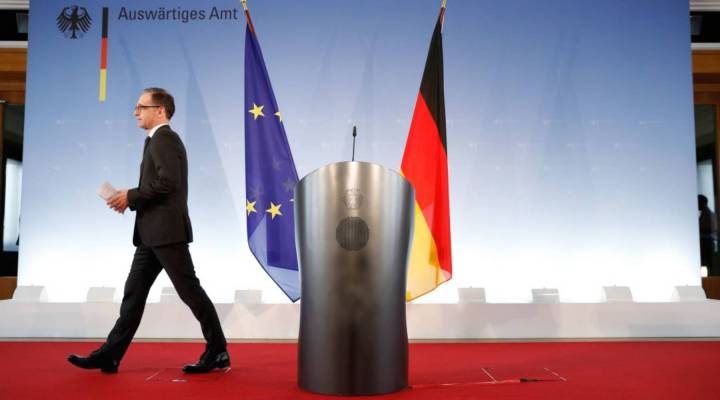 America might be out of the Iran nuclear deal, but Europe hopes to stick with it. The leaders of Germany, France and Britain have urged President Trump not punish countries that do business with Iran. And Iran’s president Hassan Rouhani said the agreement still stands, minus America. Michael Tockuss is with the German-Iran Chamber of Commerce Association in Hamburg. German-Iran trade stands at 3 billion euros annually. Anu Anand, host of Marketplace Morning Report from London, asked him if this morning, it’s business as usual for his members.

Michael Tockuss: When I entered my office this morning, I started immediately to get in contact with the most important members of the German Iran Chamber of Commerce and the result of this was we will do exactly what you mentioned: business as usual.

Anu Anand: Why? Do they have confidence that the European leaders, including your own Chancellor Merkel can broker a deal that avoids U.S. punishment?

Tockuss: Well, in 2015, we had US sanctions, we had EU sanctions, we had sanctions of a lot of individual countries. At the moment, the remaining countries who stick to these kind of sanctions are the US, Israel and Saudi Arabia. I did not find any other countries who welcomed these sanctions, so we are in a different position. The position of the Europeans is very clear. It was stated last night too. The Europeans, the Russians, the Chinese, all of us, we will try to keep his agreement alive.

Anand: But the U.S. has said that within six months secondary sanctions will snap back in. Don’t German businesses risk losing access to the world’s biggest economy if they go against the White House, if they continue to do business in Iran.

Tockuss: Well, let’s see it first from the legal statues. What the United States are doing is first applicable law in the US. We should not accept that American law is applicable for third countries and for companies outside the US. One of the things which give us a certain confidence is that our European leaders and the European community are now working on measures to protect European companies from US sanctions. The mistake our European leaders did in the past – in 2014/2015 – when we had sanctions that they were silently accepting this instrument of secondary sanctions. Now we have a different situation. There’s a clear statement that our governments will not accept these sanctions.

Anand: You sound incredibly bullish. I just wonder at what point you and others will say, ‘O.k. let’s be real here, global banking, everything goes through the U.S. If our leaders are not seen to be making progress, then businesses have to start thinking about their options.

Tockuss: Even during the sanctions time, there was business between Europe and Iran. We know how the things are going. The difference nowadays is that the US stands quite alone with this intention. The backbone of trade between Germany and Iran is done by these small and medium companies in the field of machinery and plant manufacturers. And these companies they have a different risk calculation than international big operating companies. A lot of them, they don’t have set ups in the United States and they are not as frightened as international operating companies. As long as there is a legal basis according to German and European law, I can guarantee you these companies will continue to do business with Iran. Of course they have to execute this business. Practically, they have to get their money. They have to travel there – all these kinds of things. Banks like Deutsche Bank, like Commerz Bank they refused even two weeks ago to do any Iran transactions. These financial executions will be done through small banks all over Europe or even outside Europe with no exposure to the US with a limited number of dollar transactions. So somehow we are prepared for what is coming up.

EU moves to shield companies that trade with Iran from U.S. sanctions