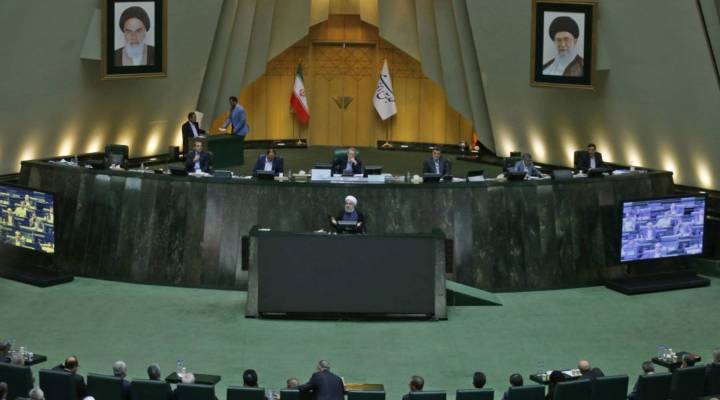 COPY
President Hassan Rouhani speaks at the Iranian Parliament in the capital Tehran, on August 28, 2018. - It was the first time Rouhani had been summoned by parliament in his five years in power, with MPs demanding answers on unemployment, rising prices and the collapsing value of the rial, which has lost more than half its value since April. ATTA KENARE/AFP/Getty Images

President Hassan Rouhani speaks at the Iranian Parliament in the capital Tehran, on August 28, 2018. - It was the first time Rouhani had been summoned by parliament in his five years in power, with MPs demanding answers on unemployment, rising prices and the collapsing value of the rial, which has lost more than half its value since April. ATTA KENARE/AFP/Getty Images
Listen Now

Iran’s Supreme Leader, Ayatollah Ali Khamenei, the highest ranking political and religious authority in the country, has urged the government to work “day and night” to solve Iran’s economic problems.

Inside the country, the worst drought in half a century is affecting most of Iran, worsening water shortages and leading to sometimes violent protests. Along with unemployment, which stands at 25 percent among its overwhelmingly younger population, and new U.S. sanctions, Iran appears to be spiraling into severe economic trouble.

In May, President Donald Trump withdrew from a landmark nuclear deal between Iran and several world powers, reinstating sanctions and warning other countries not to do business with Iran.

On Aug. 7, the first set of President Trump’s sanctions came into effect, covering Iran’s automotive, gold and steel sectors, and transactions related to the currency, the rial. The rial has lost two-thirds of its value against the U.S. dollar in the last year.

“Many people in Iran find themselves in a desperate situation. The collapse of the currency has led to huge price rises — even in the price of basic foodstuff. Many are finding it difficult to make ends meet,” said Kasra Naji, special correspondent for BBC Persian TV.

Further sanctions aimed at Iran’s oil industry are expected to go into effect on Nov. 5. Iran had been exporting an average of two million barrels of oil a day, but sanctions could cut that figure in half.

The BBCs Persian Service reaches an estimated 18 million Iranians, a quarter of the population. Its listeners’ stories show signs of increasing personal hardship.

“I went to buy my wife’s medicines after three months,” said Siavash, who lives in Zanjan in northwestern Iran. “But the price had gone up by 40 percent.”

Omid in Kharaj, just outside Tehran told the BBC: “We’re not dealing with an economic crisis anymore. This can only be called a catastrophe.”

Many Iranians are distressed by punishing summer temperatures, combined with the lack of water.

“Imagine being out in 120-degree heat all day and looking forward to that cool shower when you get home, but you get there and find out the water supply has been cut off,” explains Reza in Ahvaz, in western Iran near the border with Iraq.

The drought and water shortages have hit Iran’s farmers hardest, but have also affected industry including oil wells and sugar cane refineries. U.S. sanctions and the political rhetoric are adding to the strain.

“We’re actually losing sleep over their war of words … this is too much,” said Amir in Khazvin, near the Caspian Sea. “We’re all very anxious because of an uncertain future. We don’t see a future for ourselves or our children in this country anymore.”

Ayatollah Ali Khamenei’s suggestion today that the government should be doing more will add pressure on President Hassan Rouhani. He was summoned to parliament on Tuesday, where lawmakers demanded explanations for Iran’s unemployment, rising prices and the falling rial. Of Rouhani’s cabinet, two ministers — including the economy and finance minister — have been dismissed, while two others have been threatened with impeachment over the country’s economic problems.

“All this puts huge pressure on the government of President Rouhani who seems to have very few ideas about how to tackle these problems,” said the BBCs Naji. “The Supreme Leader is not in a much better position. After all, if the country goes down he will go down with it.”

Some in Iran worry that the political and economic troubles could lead to violence.

“The new sanctions will only add fuel to this fire,” said Homayoun in Shiraz, the ancient Persian city known for its flourishing pre-Islamic past. “It will get so bad that people will actually turn on each other. I think there will be riots and looters will ransack all the shops.”

The only solution for Iran seems to be least attractive diplomatic option, according to Naji.

“Iran has to put its relations with the United States on a new footing,” he said. “President Trump has said he is willing to open talks with Iran anytime, anyplace. But Iran’s supreme leader has ruled that out, and today he repeated that Iran would not open talks with the Americans at any level because of their bullying and their decision to openly enter into a fight with Iran. Iran’s enmity towards the U.S. has cost it dearly over the past four decades.”