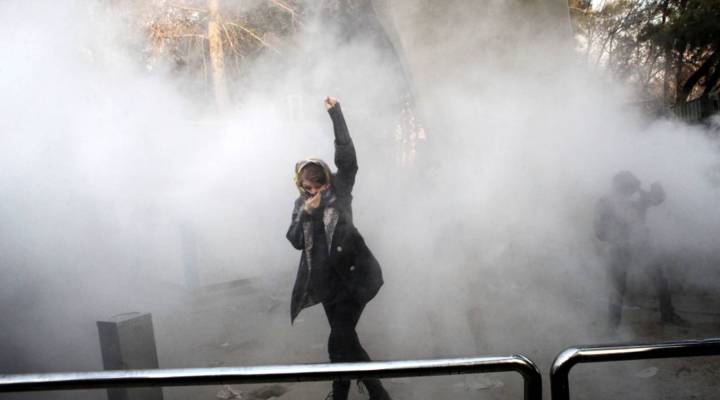 An Iranian woman raises her fist amid the smoke of tear gas at the University of Tehran during a protest in the capital on Dec. 30. Students protested in the third day of demonstrations sparked by anger over Iran's economic problems. STR/AFP/Getty Images

An Iranian woman raises her fist amid the smoke of tear gas at the University of Tehran during a protest in the capital on Dec. 30. Students protested in the third day of demonstrations sparked by anger over Iran's economic problems. STR/AFP/Getty Images

TEHRAN, Iran (AP) — As Iranians take to the streets in the biggest demonstrations in nearly a decade, residents of the increasingly tense capital say they sympathize with the protesters’ economic grievances and anger at official corruption.

The Associated Press spoke to Iranians in Tehran on Tuesday, the sixth day of protests that have seen at least 21 people killed and hundreds arrested across the country. The protests, which have erupted in several cities, are the largest since those that followed the disputed 2009 presidential election.

Residents cast nervous looks at the growing street presence of police and Basij, a volunteer force that played a key role in the government crackdown that ended the demonstrations nine years ago. But many residents said the country’s soaring unemployment and rising prices had driven people to the point of desperation.

“If authorities do not fight protesters, then they will have peaceful protests,” said Rahim Guravand, a 34-year-old construction worker.

“I’ve been out of work for months. Who is accountable for this? The government should stop spending money on unnecessary things in Syria, Iraq and other places and allocate it for creating jobs here,” he said, referring to Iran’s support for the Syrian government and regional militant groups.

Iranian President Hassan Rouhani, a relative moderate who was re-elected last year, has expressed sympathy for peaceful protesters worried about how to make ends meet amid high unemployment and 10-percent inflation.

But his support appears to be slipping as many Iranians fail to see any gains from his 2015 nuclear agreement with world powers, under which Iran curbed its nuclear program in exchange for the lifting of some international sanctions. Iran has made billion-dollar airplane orders and resumed selling its crude oil on the international market, but the benefits have yet to trickle down.

“I voted for Rouhani, but I see his hands are tied and he cannot fulfill his promises,” said Parisa Masoudi, a 23-year-old student at Tehran’s Azad University. “The government should open the political sphere if it intends to keep the people’s support.”

Nasrollah Mohammadi, a mechanic near Tehran’s Enghelab Square, the site of many past protests, said he supports the demonstrators’ demands.

“They are right. Corruption is high and opportunities are given to their own friends,” Mohammadi said, referring to government officials. “I have two sons, 27 and 30, at home without jobs years after graduation.”

In 2009 the protests were largely centered in Tehran, led by middle and upper class supporters of reformist candidates who lost to the hard-liner Mahmoud Ahmadinejad in an election best by allegations of fraud.

The latest protests began in Mashhad, the country’s second largest city, and have flared across the provinces, with no clear leadership or political platform beyond anger at the government. Tehran has also seen protests, but the most violent clashes have been elsewhere.

Not everyone in Tehran supports the latest demonstrations. Farnaz Asadi, a 31-year-old who sells goods via the popular messaging app Telegram, expressed anger at the government’s decision to shut down the service after protesters used it to organize rallies and share photos and video. The app is used by an estimated 40 million people a day in Iran — half the country’s population.

“It is not fair. Some protesters went into the streets, but why I should pay the price?” she asked. “The government shut down Telegram and my store was shut down too.”

Another university student, 21-year-old Reza Nezami, described the Telegram shutdown as another promise broken by the government. “Rouhani had said his administration would not restrict social networks,” he said.

For others, the protests represent just another hardship.

“I am not happy. Some protesters broke windows and damaged public property,” said Abbas Ostadi, a 45-year-old electrician. “They burned my friend’s taxi. Who is going to compensate him? How will he take home some bread for his family?”