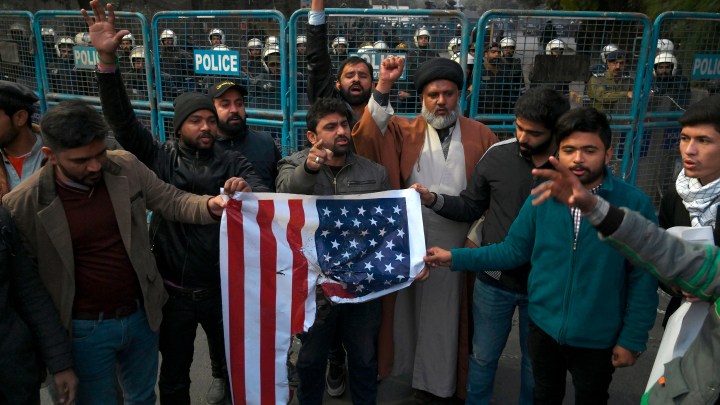 COPY
Protesters in Lahore, Pakistan, hold a burned U.S. flag on Friday as they shout slogans during a demonstration near the U.S. consulate following a U.S. airstrike that killed Iranian commander Qassem Soleimani in Iraq. Arif Ali/AFP via Getty Images

Protesters in Lahore, Pakistan, hold a burned U.S. flag on Friday as they shout slogans during a demonstration near the U.S. consulate following a U.S. airstrike that killed Iranian commander Qassem Soleimani in Iraq. Arif Ali/AFP via Getty Images
Listen Now

The Middle East, and indeed the world, is awaiting Iran’s retaliation following the killing of the top Iranian commander early Friday by a U.S. drone strike in Iraq. So far, there’s been nothing, but this is a critical spot in the world’s oil market. Since the world economy still drives and runs on crude, analysts are trying to assess where the heightened risks are to oilfields, workers, pipelines, processing facilities, vessels and shipping lanes.

“The first [location] would be Iraq because Iran does not want to enter into a direct war with the rest of the world,” Vakhshouri said.

Iraq has oil fields and facilities run by American companies, and like the U.S. Embassy, they appear to be taking precautions with their employees.

“We have heard through our network that yes, some of the U.S. companies have already started calling their staff out,” Vakhshouri added.

Vakhshouri said Iran is unpredictable in where and when it attacks, so it will be a guessing game.

Matt Smith, who tracks oil vessels at the firm ClipperData, said Iran is known for seizing tankers and hitting them with mines. He’s watching the Iraqi port of Basra.

“Iraq is one of the leading oil exporters in the world,” Smith said. “They sent out of Basra 3 million barrels a day. Perhaps attention will shift towards Iraq and the potential disruption in flows there.”

Many analysts predict these kinds of land and sea attacks could boost oil prices by $10 a barrel, or about 15%.

Prices for oil tanker trips have already spiked from $115,000 to $300,000, according to James Jang, head of maritime at Aegis Capital. He said many vessels are already avoiding the region.

“The chatter right now is rates are being pushed up just because of limited supply of vessels in the region, because of possible war risk,” Jang said.

But the big risk is an escalating incident that leads to all-out war, said Ilan Goldenberg, former Iran chief at the Pentagon, now with the Center for a New American Security.

If a crisis spirals, he said Tehran could close the Strait of Hormuz, the only shipping route for 20% of the world’s oil.

“Anything that might trigger that all-out confrontation between the U.S. and Iran is actually the thing that is likely to have long-term impact on global oil supply and global oil price,” Goldenberg said.

Some analysts say that scenario could cause oil prices to double.