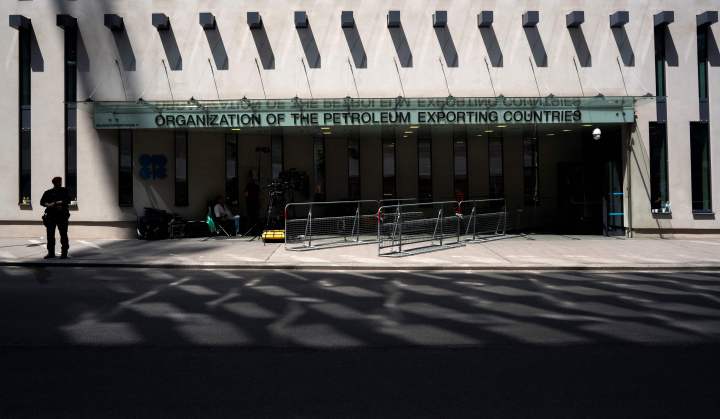 COPY
The relationship between Russia and the Organization of the Petroleum Exporting Countries has always been contentious. Joe Klamar/AFP via Getty Images

The relationship between Russia and the Organization of the Petroleum Exporting Countries has always been contentious. Joe Klamar/AFP via Getty Images
Listen Now

Tomorrow, members of OPEC+ will meet to set oil production targets for the first time since the European Union agreed to a partial ban on Russian oil.

OPEC+ includes all 13 countries that are members of the Organization of the Petroleum Exporting Countries, plus 10 non-OPEC countries. That latter group includes Russia, one of the world’s top oil exporters.

There are murmurings, according to The Wall Street Journal, that some of the countries involved are considering barring Russia from participating in setting production targets.

The relationship between Russia and OPEC has always been contentious. Even though it isn’t an official member of OPEC, Russia has been working with the cartel to set how much oil gets onto the market since the middle of last decade.

“Both the Saudis and the Russians have been keen to say that they see strategic value here,” said Mark Finley, fellow in energy and global oil at Rice University’s Baker Institute.

That value, Finley said, rests partly on the fact that the Saudis and the Russians produce the second-most and third-most oil in the world, behind the U.S. Their partnership carries a lot of pricing power — and sometimes the alliance has looked like a good geopolitical bet, too.

“And we’ve seen efforts, in fact, on both sides to at least pay lip service to the idea of expanding that strategic relationship beyond the tactical dimensions of cutting and managing oil production,” Finley said.

That is, until Russia invaded Ukraine, he added. Since then, Russia has been missing its oil production targets. And if it’s not hitting its quotas, it’s not of much use to OPEC, said Sara Vakhshouri, president of SVB Energy International.

“Because Russia cannot make its commitments — and also the policies of Russia are not in line with OPEC’s agreement — then it might be a perhaps a good solution for OPEC to have Russia out,” Vakhshouri said.

In the past, OPEC has exempted some countries under sanctions from meeting production targets, including Iraq in the 1990s and currently Iran, Libya and Venezuela. But, said Michael Lynch, a distinguished fellow at the Energy Policy Research Foundation, OPEC has to be careful if it’s going to distance itself from Russia.

“Unless they’re allowed a very graceful exit, I think it’s going to make it a lot harder to get their cooperation in the future,” he said. “And that could be a real problem for OPEC.”

If OPEC wants to cut production in the future to help regulate prices, Lynch added, Russia might just say no.