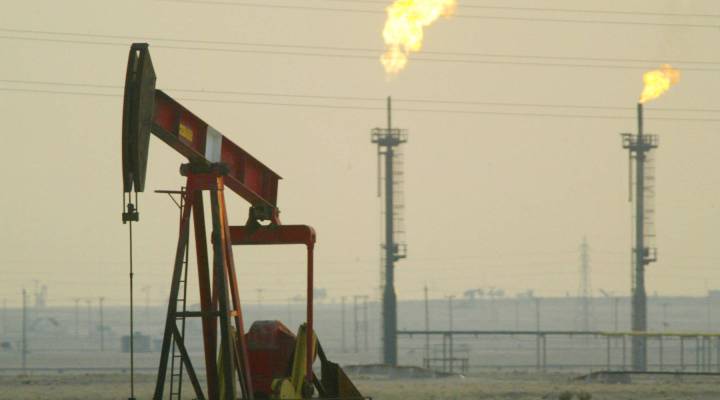 With oil prices so low, much of the oil market has its eye on one producer in particular: Saudi Arabia.

It is the dominant member of OPEC. And for all the reasons oil prices fell in the first place, perhaps the biggest is OPEC’s call in late 2014 to keep pumping full bore. And flood the market with oil.

What was the motivation for the Saudis? And with oil now so low for so long, is their strategy working?

One word that crops up a lot with Saudi Arabia is … opaque. The leaders of the kingdom tend not to share their thinking. But the consensus in oil markets is that the Saudis led OPEC’s decision to flood the oil market in 2014, and send the price crashing.

“The low prices really kept the shale revolution a U.S. phenomenom, rather than expanding it to countries like China,” he said.

And, Vakhshouri said the move to cut prices keeps the world’s car drivers addicted to petroleum, rather than trying alternatives.

“The low oil prices could slightly push global demand high,” he said. “It of course makes it harder for renewables to progress as fast as they were doing.”

So think of the Saudis as the Wal-Mart, the Southwest Air, of crude oil. Low costs, deep pockets. But even in the monarchy, money’s not forever. Not at prices a third of what they were a couple years back.

“Saudi has huge reserves financially,” he said. “And they can get away for several years with running huge budget deficits. It’s not they are in immediate crisis. But looking toward longer term, it does become unsustainable even for Saudi.”

If crude prices stay low, the International Monetary Fund figures Riyadh could burn up its savings in five years. Here’s the issue: Saudi Arabia spends a lot right now — on subsidies at home, on Sunni mosques and schools in the region and more.

“They made a whole bunch of commitments at a time when oil was very expensive,” Lynch said. “And now they suddenly find themselves forced to continue to pay out at a time when the price of oil has really plummeted.

So now comes austerity. The government has just doubled the price of gas at home. And it cut subsidies for electricity, in a hot desert country where people are known to blast the A/C at home, even when they’re out.

“The second generation, the young guys if you like, are taking over,” said Middle East consultant Jean-Francois Seznec.. “The young prince who is so criticized for being a hothead and so on, he’s really in charge of modernizing the economy.”

And in charge of defense spending. The Saudis are bankrolling a war against militants next door in Yemen — it’s not going so well. And they support rebels in Syria — they’re not doing well.

Seznec said that what ties these together is an attempt to counter a rising Iran in the region. It’s a longtime rival of the Saudis.

“To this day,” he said, “I think there is a fear in the Saudi leadership that the Iranians are basically taking over Iraq, have taken over Syria, etc. etc.”

Iran just reached a nuclear sanctions agreement with the U.S. — a longtime ally of Saudi Arabia.

Today, the U.S. pumps more of its own oil than ever. So, is American support for the Saudis waning?

“It may not be a fact.,” Seznec said. “I’m not saying that the U.S. is moving out. But I’m saying the perception by the Saudis is that the U.S. has lost interest.

In the end, much of the kingdom’s interest comes back to oil.

The rival Saudis and the Iranians are members of OPEC, and if they can’t get along, it’s less likely OPEC will agree to intervene bring oil prices back up.

And the global price rout goes on.