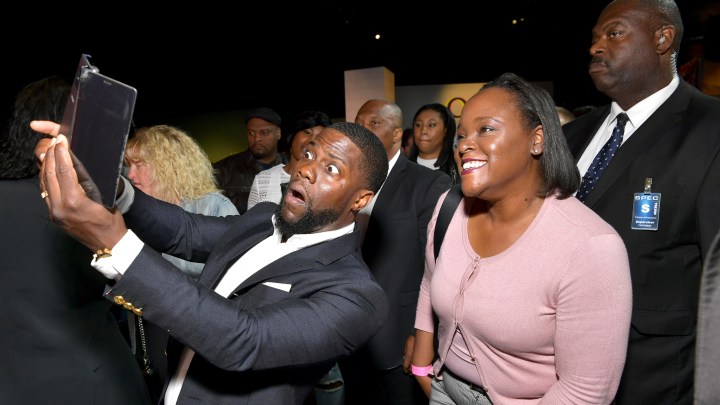 COPY
Kevin Hart attends the 'Netflix Is A Joke' screening at Raleigh Studios on May 11, 2019 in Los Angeles, California. Emma McIntyre/Getty Images for Netflix
Netflix

Kevin Hart attends the 'Netflix Is A Joke' screening at Raleigh Studios on May 11, 2019 in Los Angeles, California. Emma McIntyre/Getty Images for Netflix
Listen Now

On Friday, Netflix premiered a new docuseries on comedian and actor Kevin Hart, one of several celebrities targeted by so-called “cancel culture” in 2019. The six-part series, “Don’t F***k This Up” follows Hart through a challenging year, including his pulling out of hosting the Oscars following a public backlash to homophobic comments he previously tweeted.

Comedians in particular have been subject to “cancel culture,” with people on social media organizing to boycott the work of entertainers for past statements or acts.

“[2019] was a year where celebrities and power makers were asked to be responsible and respond to things that the people they serve and work for ask them to be responsible to,” said Steven Thrasher, a journalism professor at Northwestern University. But, Thrasher pointed out, even “cancelled” celebrities haven’t really disappeared.

“I think usually when people are called out in ‘cancel culture,’” Thrasher said, “they actually go on with their jobs.”

Kevin Hart has done two Netflix specials so far this year. This latest docuseries is part of a sort of redemption story for him, according to Anjana Susarla, an assistant professor at the Broad College of Business at Michigan State University who researches how businesses respond to social media pressure.

“Social media is creating the cancel culture, and then Netflix also knows so much about us that they know is there is a place for all these cancelled individuals,” Susarla said. “So we should probably only expect to see more of these things in the future.”

Hart remains a popular comedian, and the docuseries also deals with his struggles with fame, family and a serious car crash that left him severely injured.

There has been a growing backlash against cancel culture, with some people arguing it restricts artistic expression.

Damon Young, a senior editor at theRoot.com and Very Smart Brothas who covers culture and entertainment, argues cancel culture does not really exist. Several of the comedians who’ve recently faced backlash for past work, he points out, have been able to move past it simply because they are still profitable performers.

According to Forbes Magazine, Kevin Hart is the highest-earning stand-up comedian for the second year in a row, raking in $59 million between June 2018 and June 2019.