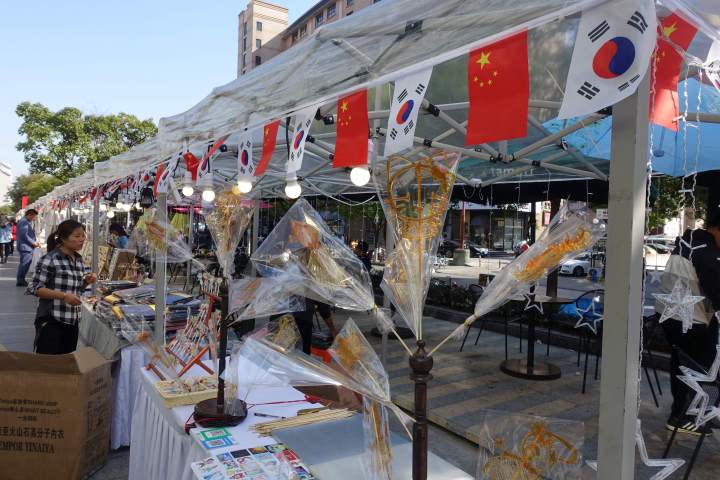 The National Basketball Association is one month into its season, yet its games have not resumed broadcasting on China’s state-run CCTV.

It is part of the economic repercussions the NBA faced after the Houston Rockets’ General Manager Daryl Morey tweeted support for protesters in Hong Kong last month.

Chinese state media said the league had challenged the country’s territorial integrity, which crossed a red line. Most of the NBA’s sponsorship deals in China are still suspended or have been canceled.

For South Korea, it’s been three years and counting.

“No new Korean video games have been introduced in China during this time,” said Oh Guang Jin, a journalist at South Korean news site Chosun Biz.

“There are still no South Korean TV series or films allowed into the Chinese market.”

He said China-South Korean relations were enjoying a high in early 2016.

The trouble began later that year in July, when South Korea signed a deal with the United States to deploy the Terminal High Altitude Area Defense, which is an American anti-missile system, on its territory.

China’s government believes THAAD is a tool for the U.S. to spy on the Chinese, which meant South Korea had crossed a red line.

“The Chinese government never issued reasons behind these cancellations, but we all knew officials were not happy about THAAD,” journalist Oh said. He was based in Beijing for Chosun Biz at the time.

“This was something that they had to do because they were ordered by the South Korean government,” Shaun Rein, author of the book “The War for China’s Wallet” said.

When countries and politics collide, companies need to take the hit.

At the time, Lotte had 112 supermarkets in China, but most of them were shut down by local governments.

“They said the stores violated fire safety codes and had other legal issues. It was definitely a retaliation,” said journalist Oh.

“There were no written directives from the central government about the ban,” Oh said. “Big travel agencies in China said they received verbal orders from officials, and those directives were later leaked to the media.”

The impact was severe.

According to the Korea Tourism Organization, there were 8.1 million arrivals from mainland Chinese in 2016. That number dropped by about half in 2017 to 4.1 million.

Soon, the Chinese public joined in the anger against Korean companies.

A video widely circulated at the time showed rows of Chinese schoolchildren pumping their fists in the air and chanting:

Get Lotte out of China!

It starts with me!

It is every man’s duty!

Many Koreans had seen the video.

“It terrified us that such young children calling for a boycott of South Korean firms,” journalist Oh said.

Businesses that imported Korean foods, like Shikecun Group, said they were helpless against the boycott.

“Our sales of Korean snacks went down by 40% within the first month of the boycott,” Shikecun Group’s General Manager Li Kang said.

According to the Hyundai Research Institute, South Korea suffered an economic loss of $7.3 billion as a result of the THAAD crisis.

“That is the equivalent to half a percent of South Korea’s GDP,” said Han Jae Jin, the Hyundai institute’s manager of global emerging markets.

Not all industries were affected. Han said Samsung’s chipsets, which are crucial for China-made goods, were not subjected to economic retaliations.

Today, there are no consumer boycotts against Korean products. However, a search on popular streaming platforms still do not carry new Korean TV series. Group tours to South Korea remain limited.

Perhaps the hardest hit company was Lotte. It was already struggling to be profitable in China, but the backlash pushed Lotte over the edge. It has sold all its supermarkets and has only 13 cinemas and two department stores left in China.

“Lotte is a Fortune 500 company, and yet its core operations in China just suddenly disappeared,” journalist Oh said.

This has made other South Korean firms think twice before doing business here, he said.