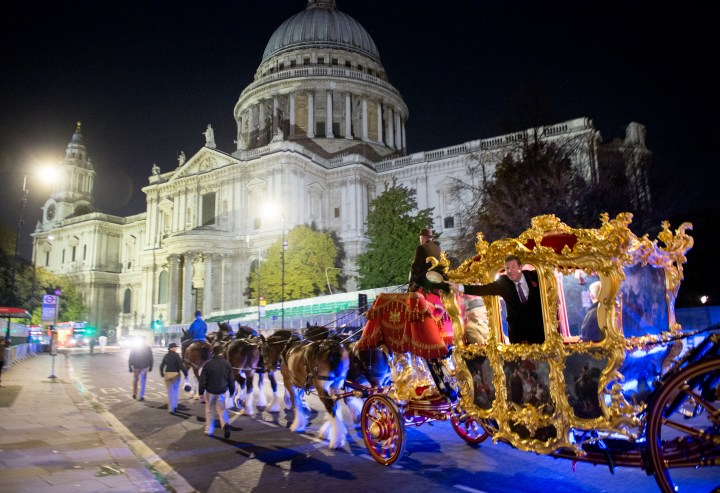 Lord Mayor of London. It’s a title that has been around for more than 800 years. The next global ambassador for the City of London is taking office during a traditional “silent ceremony” today. Tomorrow, the new mayor will lead a parade past landmarks like St Paul’s Cathedral.

For “Marketplace Morning Report,” the BBC’s Victoria Craig sat down with incoming Lord Mayor William Russell. The following has been edited and condensed.

Victoria Craig: What exactly does the Lord Mayor do?

Russell: The Lord Mayor of the City of London is the ambassador for financial and professional services, that employ about 2.3 million people, and spends a great deal of his time traveling the world — about 100 days a year, visiting over 20 countries, promoting financial services around the world and representing the UK in that sector.

Craig: You’re planning to hit the ground running, as you say, spending 100 days traveling around the world. What are your goals?

Russell: I have a theme, which is global UK, championing trade, innovation and culture. So on the trade side, it’s inward and outward investment into the UK. And it’s not just about the City, it’s investment, full stop, coming in. It could be infrastructure, it could be other elements of investment.

And on the innovation side, following on from the past Lord Mayor, Alderman Peter Estlin, who was very much about digital. He’s trying to increase the digital skills in our country. For me, on the innovation, taking that on board as well, is to do very much on fintech. And the fintech space is something I’d be very involved in. It employs over 75,000 people. And we are the number one fintech city in the world.

And then there’s the green finance side, which I’ve just partly funded a green finance institute. It’s all about the sustainability in finance. And then there’s cyber security as well, which in itself is over a £2 billion export [business] for our country. A lot of people don’t know this, but the City of London has its own police force. And that police force is not really about bobbies on the street. It’s about dealing with cyber and fraud, in financial services and around the world.

Craig: So there’s clearly plenty to keep you busy during your term. What do you see as the biggest challenge facing the financial services industry?

Russell: There are a number of challenges. I mean, for the big banks who have legacy systems, their challenge is that they need to adapt fast because fintech’s coming up, and in the insurance world, it would be more digital, have more technology involved in what they do. So the challenges are there, and a lot of them are based in the technology world.

Craig: Now we’re talking about challenges facing the financial services industry. I’d be remiss if I didn’t ask you about Brexit, which is arguably one of those big challenges. How do you think the City itself, or financial service companies, could better position themselves for Brexit? Or are they well positioned, as an industry?

Russell: Brexit is one of those things that we’ll see what happens; as far as the City is concerned, we’ve always been against a ‘no-deal,’ and we still are. I think it’d be fair to say that many of the financial services companies are prepared for Brexit. It is a challenge. And we would like clarity, and hopefully after the election there’ll be some sort of clarity and then all these businesses can move forward a bit more.

Craig: Now, on a much lighter note, we’re standing outside Guildhall and there are going to be a series of events over the next couple of days to get you all sworn in. We’re also standing in front of this beautiful gold coach that you will use during a parade this weekend … just explain the significance of where we are.

Russell: The state coach was built in 1757 and is the oldest state coach in the world that is still in regular use. It comes out twice a year. And funny enough we’re doing this interview, because at four o’clock in the morning tomorrow, I will be in this coach rehearsing before the big show on Saturday, six horses will be drawing the coaches. It’s an absolutely splendid sight.

Craig: I was going to ask you what made you want to become Lord Mayor, what inspired you to reach for this position? Is that one of the things?

Russell: A lot of people ask me that question, and the answer is no … it gives me an opportunity to inspire people; the soft-convening power of the mayoralty is enormous. And if you can make a difference in a small way to many people’s lives by being Lord Mayor of this wonderful city, then that’s something I’d like to try and do.