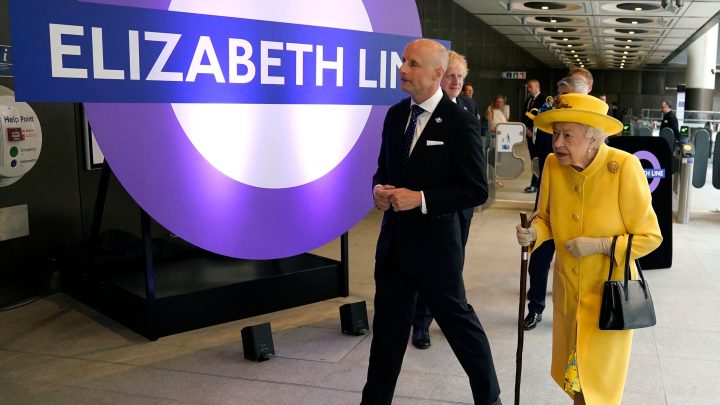 COPY
It's taken about 13 years to build and fit out London's Elizabeth Line, which was one of the biggest infrastructure projects in Europe. Andrew Matthews/Pool/AFP via Getty Images

It's taken about 13 years to build and fit out London's Elizabeth Line, which was one of the biggest infrastructure projects in Europe. Andrew Matthews/Pool/AFP via Getty Images
Listen Now

If you’re going to her party: What do you get the queen who has everything? How about a new train line?

England’s Queen Elizabeth II is celebrating an unprecedented 70 years on the throne this weekend. During the special four-day weekend, there are massive celebrations being held all across the country, including street parties, parades, even a dessert-making contest in her honor.

London’s public transit authority, Transport for London, or TfL, is also nodding her majesty’s way. This month, it officially opens a long-awaited new train line that runs through deep tunnels in central London, dubbing it the Elizabeth line.

There’s lots of fanfare, of course, but also a number of problems for a service that’s brand new. It took 13 years and almost $24 billion to get the city’s newest rail line officially up and running. Now, the 73 miles of east-to-west track has shortened journey times and provided better connectivity for areas around London, in the southeast of England.

Passengers have welcomed it with open arms, saying it’s “been well worth it” and “amazing.” Others have some concerns about the cost and how long it’s taken.

“I think with larger projects, it becomes a little difficult to manage the time, especially with the cost.,” one passenger said. “But in the end, if we are able to derive the benefit, then maybe it was worth it.”

With its cavernous and seemingly infinite corridors, the Elizabeth line was one of the biggest infrastructure projects in Europe. But it wasn’t without challenges.

Not all of the stations on the line have opened yet. And the project was nearly four years behind schedule and $5 billion over budget. Even the chief executive of the project admitted the complexity was “off the scale,” thanks to complications integrating new signaling and software systems.

Tony Travers, a professor at the London School of Economics and Political Science’s School of Public Policy, said that large-scale infrastructure spending in the billions “is something that only governments can do.”

For that reason, some delays with projects like the Elizabeth line are to be expected, he said.

“There are a number of big infrastructure projects around the world that run over budget and are delivered late. This one, in the great scheme of things, is not that bad.”

Travers explained that while billions have been spent on the new line, billions are also likely to go back into the economy because of it.

In its first week of operation, riders took more than 2 million journeys on the line. Those figures could bode well for London, as the economy moves back toward a pre-COVID normal. In recent months, the government has dropped all precautionary measures and encouraged workers to get back to the office and back on the trains. Ridership has been steadily increasing, according to Andy Lord, TfL’s chief operating officer.

“We’re running at about 70% on the Tube. At weekends, they’ve been at high 80s and 90% of pre-pandemic level,” he said. “We think the Elizabeth line is going to be the catalyst the city needs to help the economic recovery.”

A key component to London’s overall recovery is business travelers. Wi-Fi-enabled trains topping out at 90 miles per hour, then, offer easy access to both the city’s historic financial center near the Bank of England and the skyscrapers of the Canary Wharf investment-banking hub.

For example, “you’ll be able to go direct from Heathrow to Canary Wharf in just under 50 minutes,” Travers said.

And, when the Elizabeth line’s three sections are joined up this autumn, he said that time will shrink by another 10 minutes. That’s about half an hour quicker than the current journey time. TfL hopes it will help workers save money and give them greater flexibility with their schedules.