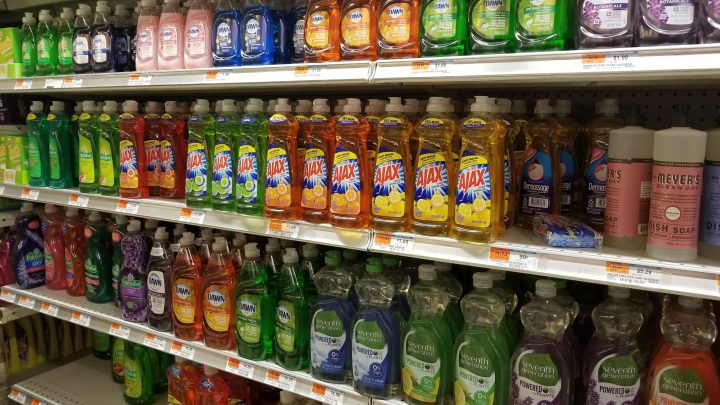 COPY
When competing brands come in different-sized bottles, it's hard to compare prices. And maybe that's the point. Marielle Segarra/Marketplace

Eugene Chang and his wife, Jenny, live in California. They have three kids and a habit of using baggies for everything — snacks, crayons, Legos. Even entertainment.

“My wife’s done a thing with, I think it was, like, corn syrup and dye and putting other things in there,” Chang said. “So they become like a squishy toy for the kids. “

On a recent trip to the supermarket, Chang noticed something in the baggie aisle: a box of 19 Ziploc bags. Not 20. Not 15.

“Which just feels like they’re cheating me out of a bag,” Chang said. “If they just gave me 20, I wouldn’t have thought about it.”

Supermarkets are filled with this kind of weirdness: 19.4 ounces of dish soap, 11.5 ounces of coffee.

Have you ever stood in the grocery aisle, frozen, unable to decide which loaf of bread or box of cereal is the better deal? Maybe you wished that you had a Ph.D. in math, because many of the same products come in seemingly random quantities and weights. One more plastic bag in this box, half an ounce more olive oil in that bottle. What’s going on here?

It’s hard to know a particular company’s reasoning, because these decisions are made behind closed doors. We asked SC Johnson, which makes Ziploc bags; its PR team simply said the company makes packages in different counts to meet “various consumer needs.”

Part of the reason could be practical — when you combine shelf size, box size and the weight of certain foods, you can get odd numbers. But marketing experts have some other theories, too.

“What you’re most likely seeing is something we call the ‘difficult comparison effect,'” said Mark Bergen, a marketing professor at the University of Minnesota’s Carlson School of Management.

A lot of big packaged goods companies don’t want to make it easy for you to compare their products based on price because they’re not the cheapest option, Bergen said. So sometimes they choose odd quantities and weights to make that calculation harder. And since only about a third of states require stores to post labels that do the math for shoppers, that usually means you’ll look at other things when you buy the products, like quality or brand or your past experience, he said.

Another possible explanation for these odd numbers? Downsizing. Bergen shared a story he heard recently from his father-in-law.

“In Milltown, Wisconsin, where he’s from, in the bars, when you know, the times get tight, the size of the beers go down,” he said.

Customers don’t like it when prices go up. So when companies want to cut costs, they’ll often just make a product a little smaller. And with packaged goods, as they chip away, bit by bit, you can get these odd numbers.

This tactic can backfire, said Marianne Rosner Klimchuk, chair of the Communication Design Pathways Department at the Fashion Institute of Technology. Customers open a bag of potato chips, it’s only half full, and they feel like they’ve been had.

“That’s a risk on the part of a brand owner that, you know, you lose consumer trust, consumer loyalty, they may not buy it again,” she said.

Because eventually, customers do notice.